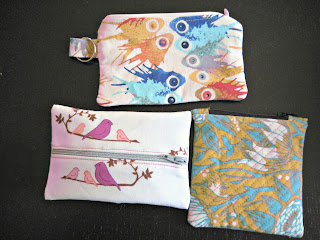 I took the first four zippered  pouches I made here to my sister, hoping she'd feign at least a little interest in them.  She was kind enough to let me press all four of them on her.

I was surprised when she pulled out a zipper pouch & purse she'd made (not that she had them, she was always more creative than me, with fabric, paint, clay - you name it) but that she'd bother taking anything I made when she could obviously sew things she wanted for herself.


I guess it's like a sandwich - I make a damn good sandwich but when somebody else makes a sandwich for me, it's just better somehow.  Nevertheless, this gave me a good excuse to make a few more zipper pouches, and to try out other tutorials that I was curious about.

I tried this tutorial from noodlehead next.  It was more complicated than the first one, but there are two benefits to it.  Due to it's assembly, the zipper is hidden between layers of fabric so it's not visible on the inside of the pouch.  It would also be good if you have a print that you want to facing the same direction on both sides.  I am sure the zippered corners could be more squared, the end product in the tutorial doesn't seem to have the same problem so much. 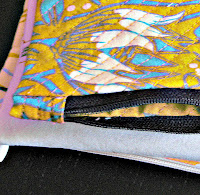 I tried this tutorial at craftpassion.com which was for a pyramid shaped triangle pouch.  I failed epically, but it seemed like a number of posters also had problems trying to figure out how to turn it into a pyramid from the directions.  On the bright side it made me want to make a quilted pouch, and I'm working on hand stitching some Kawaii in Hawaii fabric for that project now.  An upside was that I got to learn how to put fabric tabs over the ends of the zippers, which I'll use in the future. 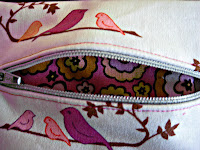 Finally I made a birdie pouch with the tutorials I used in my earlier post.  It was nice and relaxing to finish with something I'd already done a few of.

Next on my to-do list is to try out some of the boxy bag tutorials, as I want to make my husband a travel bag for his razor.  It makes me want to start putting everything in bags - hmm an oilcloth bread bag?  Cat purses?  Oh the possibilities!