Food of the Month - June Roundup 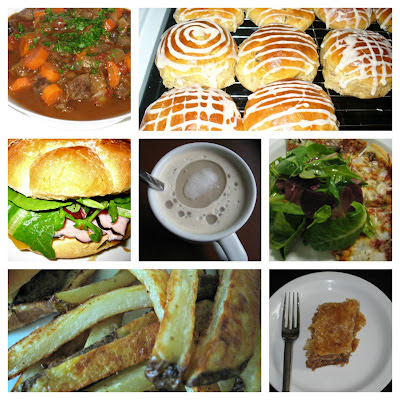 Originally I'd meant this blog to be a bit more rounded in the different things I put on it, but I've been caught up in sewing projects.  That's OK, but I'm going to slide some more randomness into it.  Apparently it doesn't come naturally to me to grab a camera before dinner,  go figure.  I swear, my diet isn't as carb heavy as this collage suggests!

1. Beef Stew with Prunes from the NY Times.  For some reason I'd had the idea to make beef stew with prunes stuck in my head for awhile.  The prunes really didn't go over very well the Mr. and I found it too sweet myself.  I added a several carrots and didn't use red wine, but did splash in a bit of marsala.  Besides the prunes it was actually really good.

2. Hot Cross Buns from the Food Network.  My husband was out of town on Easter, so I wasn't very timely about making them.  They were pretty awesome.

3.  Ham and Salad on Potato Rolls.  Not that ham, tomato and mustard sandwiches are particularly exciting, but I had some arugula and baby romaine that I tossed in Italian dressing and Frank's RedHot Buffalo wing sauce, which was amazingly tasty on top of it.

4.  Coffee with coconut oil.  I dunno, coconut oil is all trendy now.  I have a friend who cooks with it all the time and I finally got some for myself but have mainly been putting a teaspoon or two into my morning coffee.

5. Pancetta & Onion pizza.  My favorite pizza book is American Pie which is 50% travel story/50% cookbook.  It has a few dough recipes I use regularly, and this time it was NY style crust with pancetta, red onion & mozzarella topped with greens tossed in Italian dressing.

6.  Baked Fries.  Really I love making fries.  These ones I tossed in a bit of melted coconut oil and olive oil before baking at 450F.  The coconut oil was really interesting, and kept them from getting really crispy, which I like.

7. Baklava which I'd been meaning to make for awhile.  I only kind of followed Alton Browns recipe.  Cut down on the sugar and honey by 33%, used almonds and walnuts, layered it differently, and used rose flower water to spritz it as I assembled it.

Anyway, maybe this will inspire me to cook more of a variety of things.  My husband's a meat and potatoes guy which clashes with my tastes, so it's a challenge to keep us both happy (aka I shy away from veggies and fish so I don't get the sad eyes).