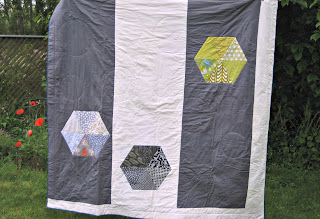 Phew! after a good amount of hand stitching (NOTHING compared to what a lot of quilters do, but more than my poor wrists & fingers wanted to handle), I feel sufficiently content switching this quilt's status to finished.  I'll post the front closer to the linky party for the quilt, otherwise I might run out of stuff to talk about (if you're reading this honey, don't laugh at that :( ) This might be the closest I get to modern quilting. It's Kona Coal and Snow. 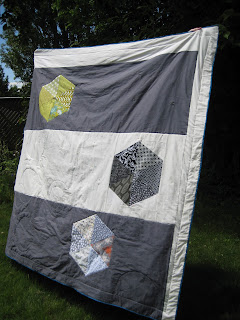 Originally I was going to do a white border around the whole thing, but I decided a bit of asymmetry would be 1. more fun 2. less pressing!

I stitched different sized circles in a variety of neutral threads.  I decided against using perle because I didn't want it to be noticeable on the front of the quilt, and I think it succeeded in that.  I'm not as sure that the circles worked with the hexagons but I was feeling dangerous so I went for it.

I'd ordered some hug snug seam binding  in a few colors and chose teal for the edges.  Now it's billed as unravel proof.  I'd been meaning to get some of it for garments for awhile, but I can't particularly recommend it for quilts.  It was difficult (aka I really had to pay attention) to sew it on.  It's only 1/2" wide so I first sewed it onto the front of the quilt very close to the edge.  I used teal thread in the spool & the bobbin.  When I folded it over to sew on the back I had to use teal in the spool and white on the bobbin or the teal would've shown on the white of the back.  If I use it again I'll probably only use matching hug snug, so I don't have to be so careful. 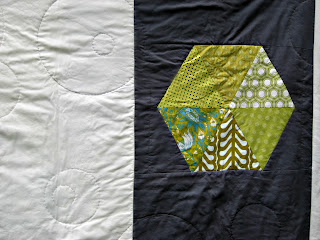 Secondly, it might not fray on the edges, but it sure frayed on the ends. I've used pinking shears to cut it for a garment I made a couple days ago - not sure if it will hold up better.  I had to hand sew the edges of the quilt down with a ton of thread at the beginning and end of the binding so it would stop unraveling.

Eww enough boring stuff.  I would've posted this a couple days ago but after washing and pressing it, the sun refused to come out so I could get some final pictures. 99% humidity in June?!?!?  Bah!
Posted by Ali at 1:23 PM