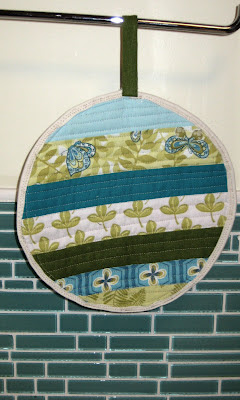 I'd really been wanting to join the Zakka Style Sew Along hosted over at LRstitched, however with the Handstitched class, finishing up my Patchwork Prism for that QAL, and the other things I'm working on, I just didn't think it was wise.

As I'm not known for wisdom, it's no surprise I got a copy of Zakka Style halfway through the sew along.  I couldn't resist joining in on attempting to make some potholders last night.  I don't need potholders so I'm not sure why I did this.

I went to culinary school as a teen, and after cooking professionally for a number of years, I'm a dedicated bar towel user for all things kitchen.  Still buy fancy silicone things to use now and again but you know where my latest one is? Hanging off my dryer.  Why? Because there's a magnet in it, and it was just in the way on my fridge.  Yep, my motto is "A bar towel solves everything" Well as of today, that's my motto! 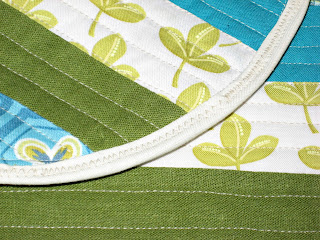 I wasn't sure how successful this project would be so instead of cutting into anything too precious,  I decided to use a couple of solids, and a bargain priced jelly roll I picked up at Big Lots over the weekend (I read somewhere they had fabric and there's one local so I HAD to go to check, and they had a few different jelly rolls for $6, as well as FQ's, yards & charm packs, all from Fabric Editions .  The quality's fine, it's sturdier than Joann's FQ's.  Whoo!  Who ever knew you could fit so much in parentheses?).


For the back I used some green linen I picked up to make some fabric baskets from, but I guess that project is just going to have to wait.

My iron had also given up the ghost after 14 months, so while I was waiting a new one to arrive I found a $9 iron there to use as a backup.  I mean...I really never pictured myself stalking around the house whining and complaining because I couldn't IRON, but it happened. 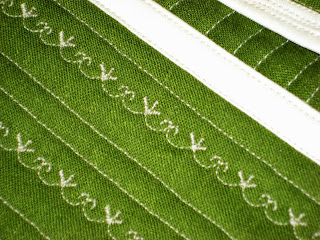 Now I'll admit, looking through the book I'm finding some directions a bit difficult to follow.  I don't do as well when fabric pieces are listed in sections instead of in a plain old list.  Next week's water bottle carrier made my head hurt because there weren't any diagrams, just pictures of the finished project, and I really love diagrams.  My head doesn't always translate directions into useful actions, I tend to be a hand-on learner. 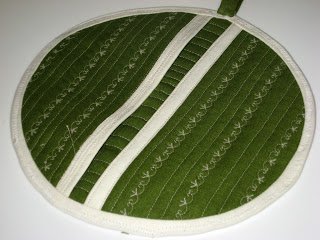 I didn't make my seam binding wide enough, so it was difficult to sew on, and I sewed it on the back first.  Perhaps I should've straight stitched THEN zigzagged... that just occurred to me!  My stitch length was inconsistent because of this & the thickness.
I added fabric tabs so I could hang them up.
I'll probably make them again, I think they'll look a LOT better the second time around, and I might pick up some of the insulating batting stuff too.

So I've already started on next weeks project, starting to think I better get out into nature someday before I miss summer!