It's my new machine!

I'm posting about my new machine.  I named her Molly.  I might change her name. Regardless I will probably forget whatever I named her, like I forgot what I named my Mustang.  I don't forget much, but made up names for inanimate objects seems to be my Bermuda triangle of information. 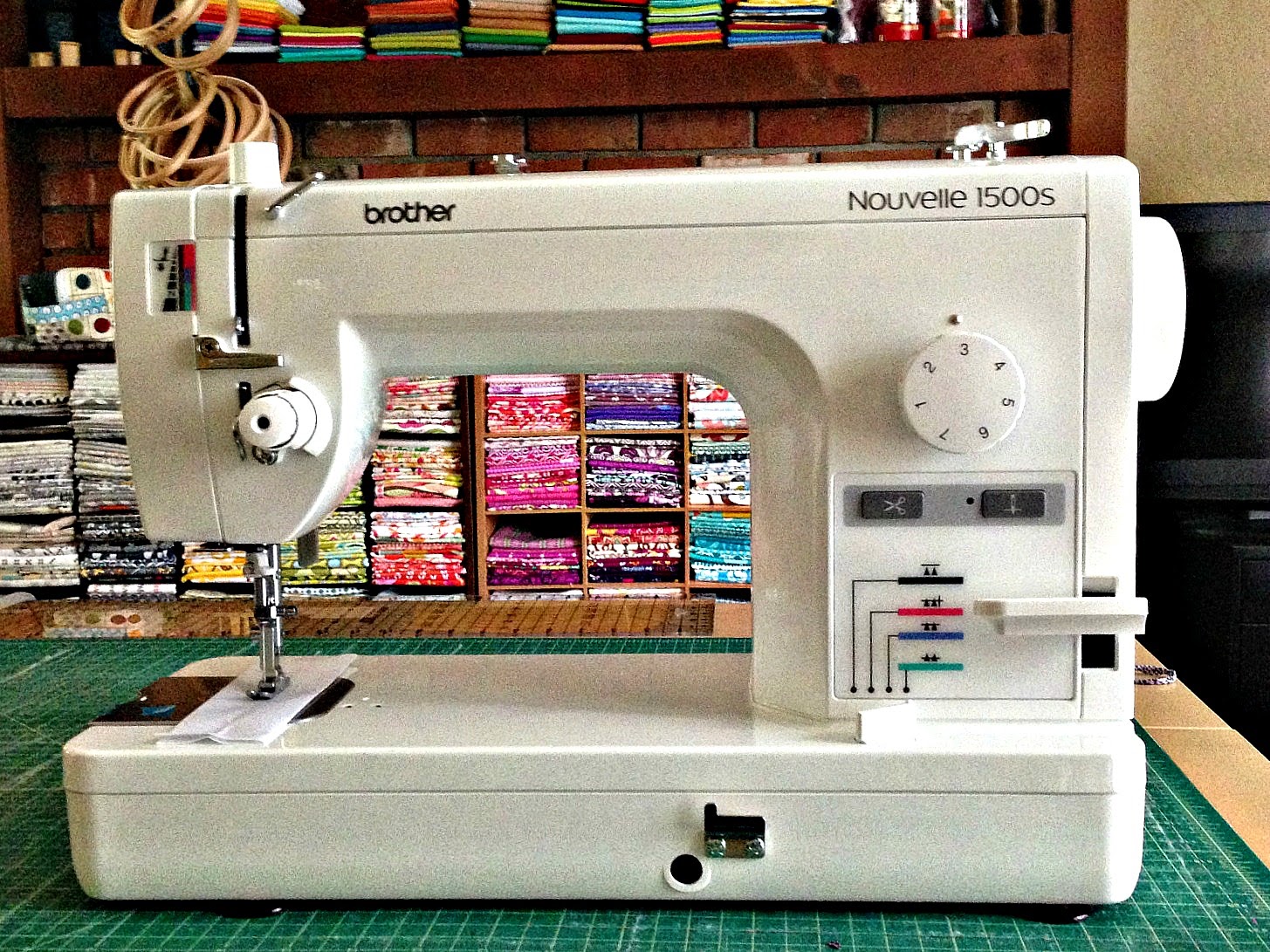 You see, it's my birthday this month.  I get weird about my birthday.  Presents make me nervous but I want to give myself a present cause I like me, so 4 weeks before my birthday when life was going BADLY I sorta caved.  I'd wanted a non-lowest tier machine for a long time.  I had a couple Juki's in my amazon list but couldn't justify the price .  During a sobby phone call to my husband about the stress of getting through the day while my garment sewing machine made me tug my double wedding ring blocks over the feed dogs inch by agonizing inch I expressed an early birthday present would make my life not suck, because despite myself I still love sewing and want it to be pleasure, not pain.

He told me to go for it, and even though I don't do spontaneous... I did..  I'd found this Brother PQ1500S on Amazon that I hadn't even registered before.  I read one details blog review on it.  The review listed it's pros and cons.  Even though one con was difficulty to replace the bobbin/can't see the bobbin without a clear screen, and thats important shit...I hit buy (did you guys take advantage of Turbotax offering an extra 10% on your tax return if you got it through amazon?  I did, so you know, it seems like it's free right?) and a few days later it was here.  I read the reviews after...

Things I am dinking with - it seems set up for cones and short spools.  I have half a straw on the machine because when I used the thread cutter it was sending Auriful spools bouncing off of the thread holder.  There's this nifty apparatus for holding spools on but Aurifil is too tall for it? Tinkering with the thread cutter, when the tension is right it leaves enough length, when its not I have to rethread a lot (trust me, it is probably user error.) Even with the same thread above and in the bobbin, it's tricky getting the tension right until I figure out where I'm going wrong. 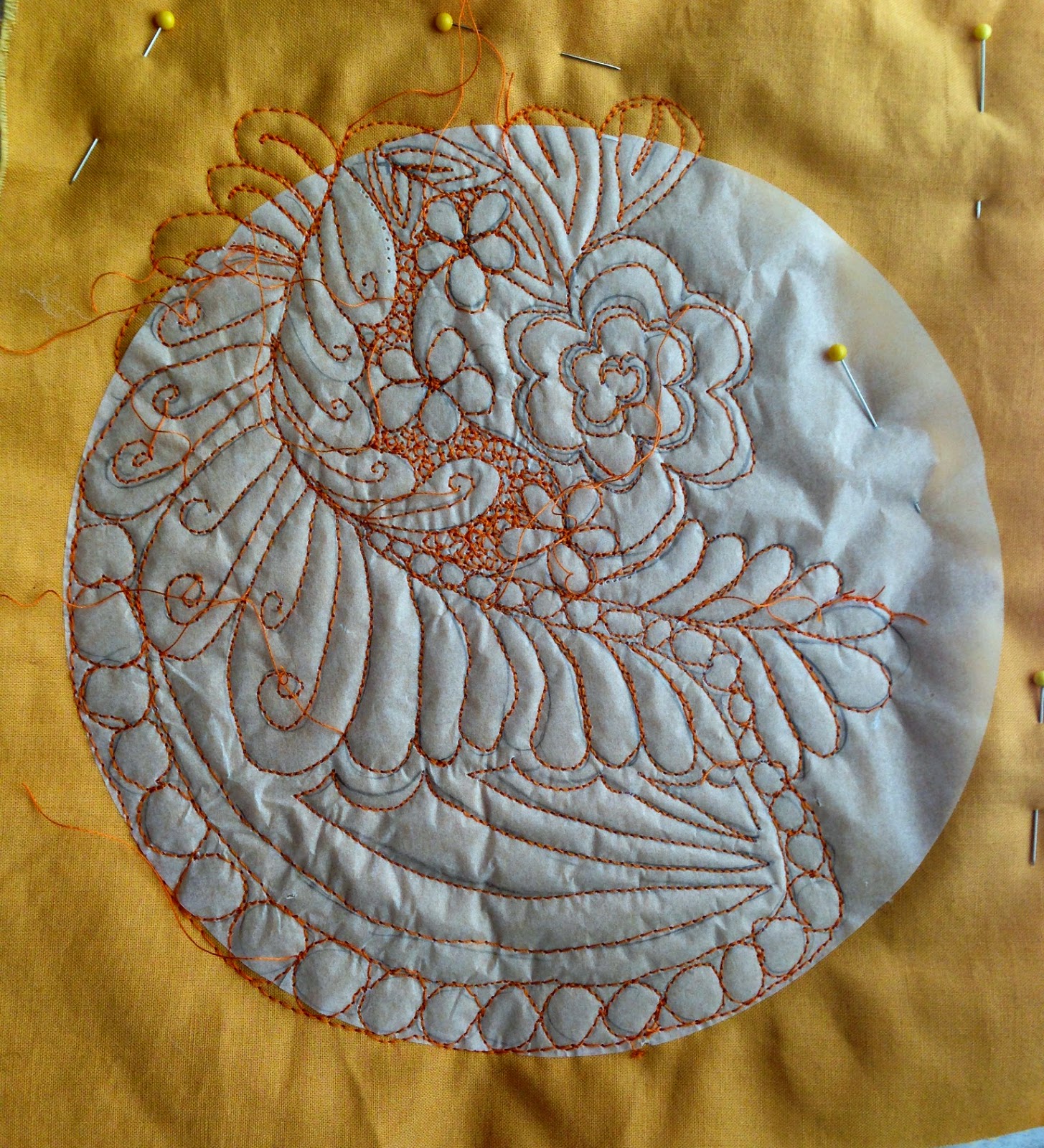 Sews like BUTTER, I was able to easily do straight quilting, it doesn't turn my seam allowances the wrong way I'm saving 50%+ as I sew together my double wedding ring quilt sections.  It has 1/4" marking that seem to be accurate..  It has a great harp space and I doodled a bit to check out the FMQ and I didn't pull out my own hair while doing it!  Bobbins hold a lot of thread, even if it's hard to get to it (ps, I think it's a benefit to be left handed due to the bobbin set up) It has a super sexy knee lift - I did not know I could feel like  *that* for a machine, but yeah, it's my favorite feature so far.
Posted by Ali at 8:00 AM 3 comments: Links to this post 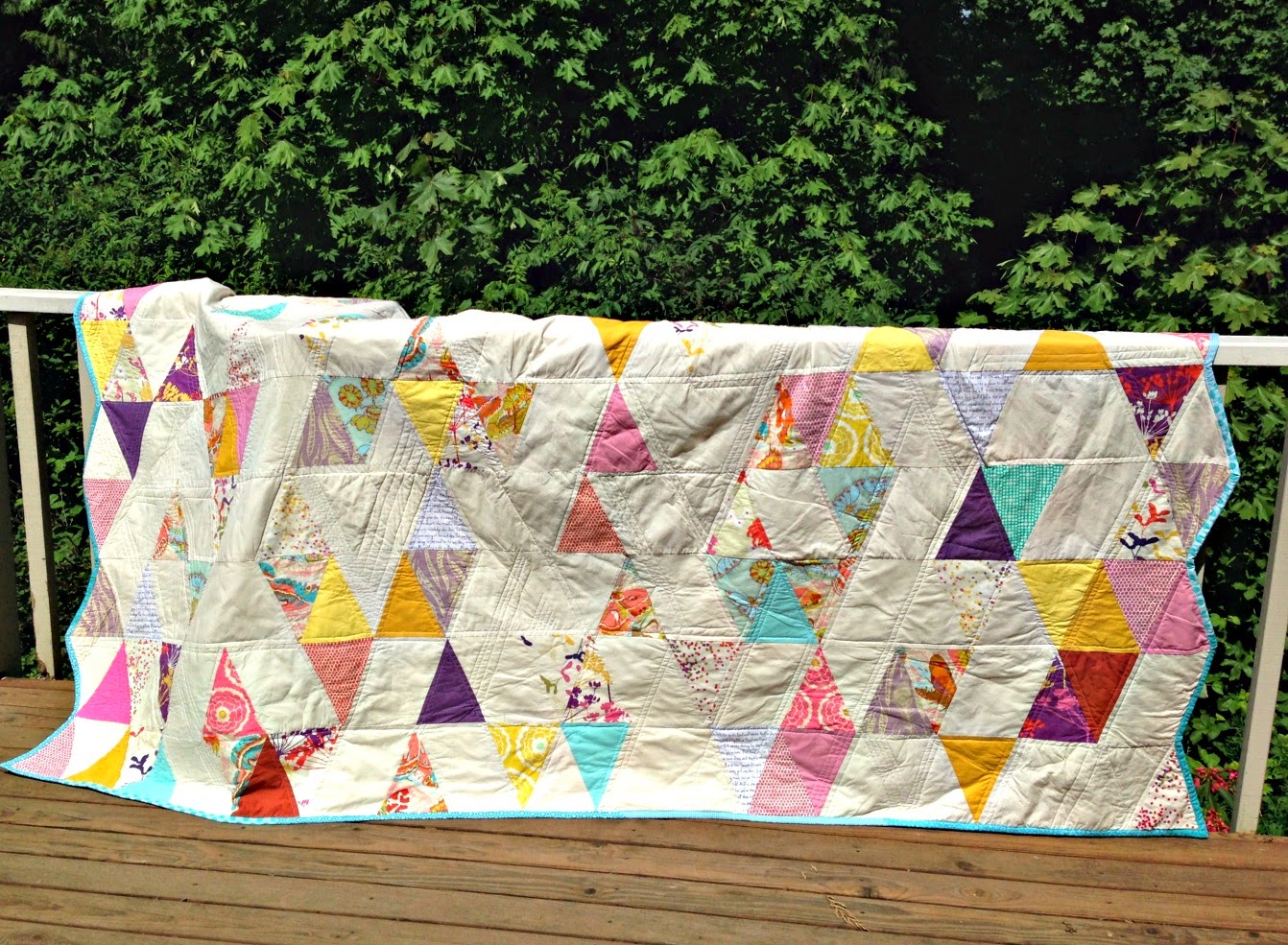 So many in progress things (and so many finishes that weren't needing a blog post - I seem to get a kick out of making certain things repeatedly, go figure!).

I finished my king triangle quilt, one I started April 2013... the damn thing should be longer but eh....  Just in time, as the warm weather has made my husband eschew thick cozy comforters -  We are using two quilts, I'm using one of my lap quilts too. How the fuck did people used to get by on just quilts?  Maybe I read Little house on the Prairie wrong.  Maybe they used a goose down comforter they got at land's end under their quilts.  I have the series on my birthday wishlist, so maybe I can reread it and it will tell me how they didn't freeze to death each winter. 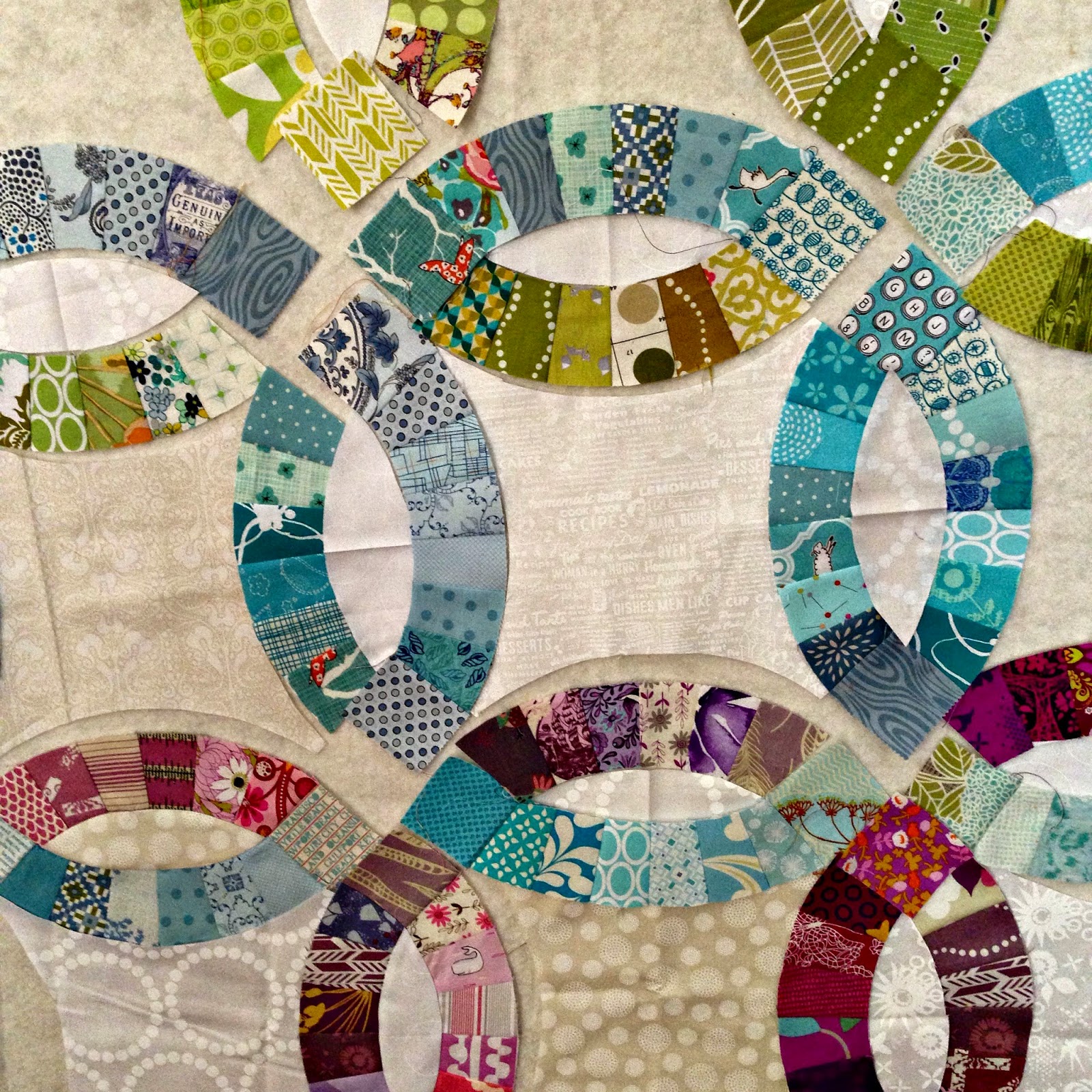 Er..OK, so I've decided to regain my voice, regardless of any of my mothers or mothers-in-law reading it or not! I do like to swear, tis true.  I also like taking crappy pictures and not worrying about it as much as I'd like, so this seems like a great decision.

I'm also working an a double wedding ring quilt which was on my quilt bucket list.  I  think it's going to be twin sized. I have a boyfriend who's mother got him one and seeing it reinvigorated my interest. I wish I had gotten my new awesome sewing machine before I started this.  1/4" seam allowance was just a vague marking on the old one. 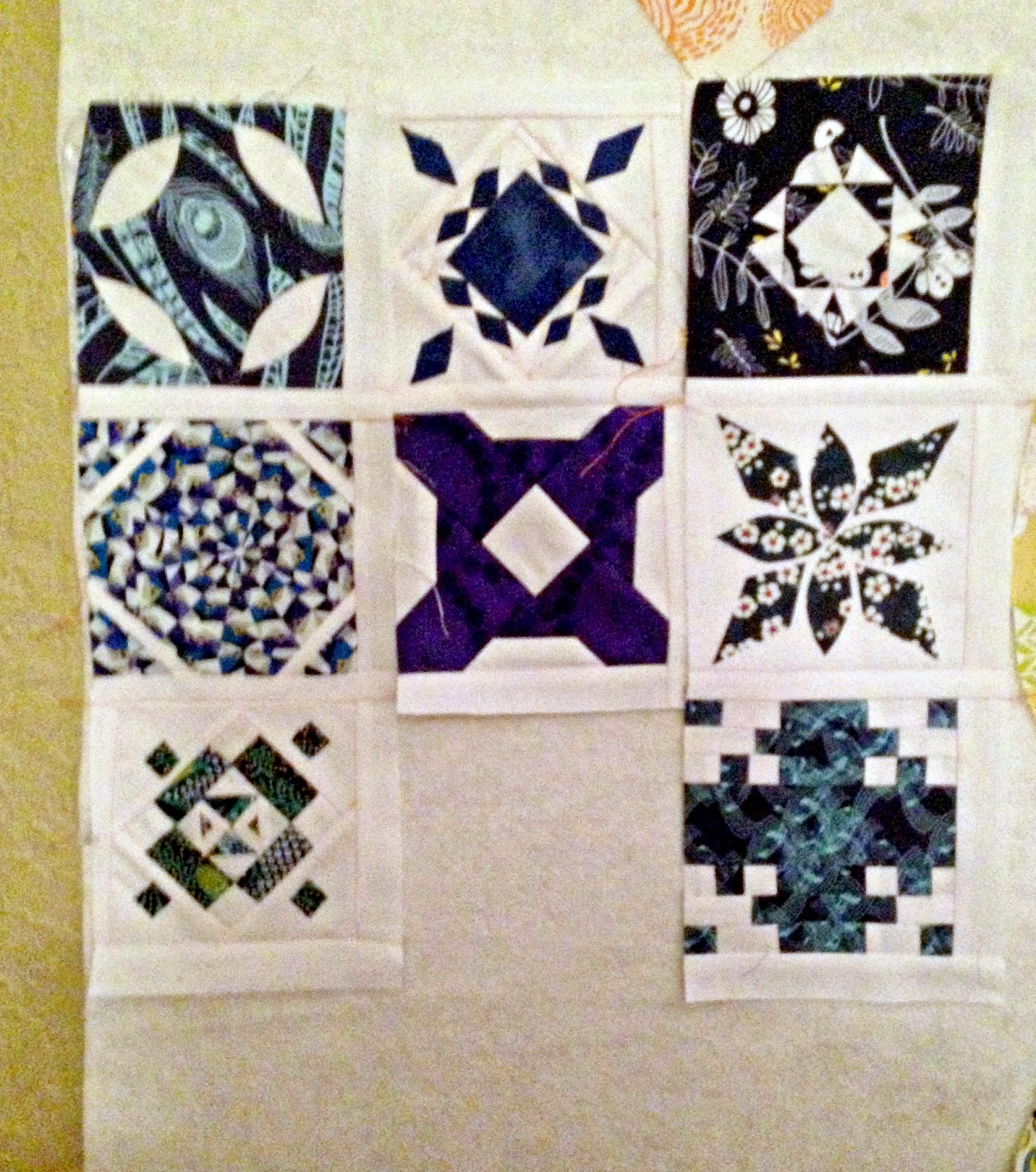 I started a new bucket list project too, cause finishing things that are taking up room would be anathema to me.  It's a Dear Jane. I don't know why.  Well I do, its because I saw this here, loved the quilting loved the version of this quilt, it was one of my first 5 pins on Pinterest.

GO DEAR JANE! I'm excited about it, so far of the dozen blocks I've made I've had 20 minute blocks and 90 minute blocks. 5.5" with sashing Gah, 220 some blocks.  It hurts.  Nevertheless I don't have a day job so sometimes I can geek out on sewing for hours at a time.


Posted by Ali at 2:13 AM No comments: Links to this post