I've been so focused on quilting that I haven't made anything to wear for a few months now.  I figured I should take a break and see if I could churn anything out. Sadly I only finished one item but I at least attempted two. 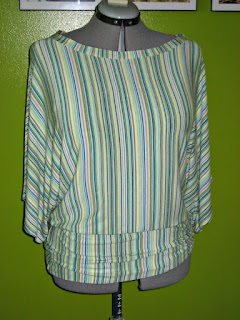 New Look 6648  - I've finally learned to use inexpensive knits first to try any new knit shirt pattern.  Though even at my smallest I never felt I had narrow shoulders, the area between my neck and shoulder is a few inches narrower per side than average, so sleeve seams are often sliding way off my shoulders.  I make alterations to all the patterns I make, but it still isn't usually enough.  Therefore I'm making an effort to make more shirts without set in sleeves so I don't have to tinker with altering multiple pattern pieces.

This is not the best pattern for my shoulders as it already has a very wide neckline.  I did narrow the neck by an inch on each side, and my muslin fits pretty well. I'm sure a camisole will look fine with it to cover up those pesky bra straps.  I have a short torso so the waist is ending up at hip level, which of course makes it a bit of an odd (read: snug) fit there.

The pattern was quick and easy, though the side gathering seemed like it wasn't working and looks wrong until it's on the body.  I'm looking forward to making another one with a few tweaks for fit at the hips and the neckline.

I'll add a review to Patternreview.com which I want to say, if you sew, and haven't seen this website, you should really check it out.  It's got people (like me and you!) who sew reviewing not only the big 4 patterns, but a lot of smaller & boutique pattern companies.  It's been an invaluable source, for tips and advice on how to deal with certain patterns.

They do happen to have user reviews of the Colette Meringue skirt too. I asked for a copy of The Colette Sewing Handbook for Christmas but didn't do the sew-a-long for it that started in January.  I've decided I want to do all five patterns that are in it, though truth to be told, I don't really think any of them would be flattering for my body type or my style at all.  For those of you who haven't heard of them, one thing that stands out about them is that their patterns are cut for C cups instead of B cups like the big 4 pattern company are.


Why make the patterns if I don't like them? Well I have a number of books on sewing, and this one is just an amazing read, from cover to cover there's tips, advice, and SO much information, and it's all really interesting.  It's the first sewing book I've wanted to read and re-read.  Also I am a C cup, and I don't like dickering with full bust adjustments on my patterns either!

So speaking of reviews: they are great things - if I'd read them right before I made something I'd save myself so much time and effort I'd be able to get a lot more stuff done.  The directions in the Colette book are great, they also have a forum where you can post and read about their patterns, so with that on top of Patternreview.com, I should've finished the Meringue skirt with no problem.  Truth is I stayed up until 5 am sewing Saturday night, so I was taking shortcuts and didn't read a thing. Hence my skirt still looks like this.

The book recommends making a paper template to follow to sew in the facing for the scalloped hem.  I was sure it wouldn't be a problem so I didn't bother (and I just stopped reading at that point!) but as you can see it's puckered around the curves. You might also see the chalk saying FRONT on the front -  I was having trouble differentiating between front and back - the darts and shape aren't that different.

This skirt isn't meant for tops to go over it, especially elastic waisted ones as you can see. It doesn't crumple up with a tucked in shirt, it lies nice and flat, I promise!  Soon I'll be ripping out the hem facing and starting over, which serves me right ;)  On the bright side, I got to put in my first invisible zipper too which was nice, I'd been putting it off for some reason, but trying new techniques is on my 2012 bucket list, both for apparel and quilting.

Email ThisBlogThis!Share to TwitterShare to FacebookShare to Pinterest
Labels: clothes