I'd do a happy dance if I wasn't so exhausted.  Note to self, next time you're binding a quilt in white, just buy bias tape!  Not that it's not satisfying to cut, iron and sew all those 2.5" strips, but phew.

Nikki at Sew Quine had a suggestion in a recent post about sewing on one side of the binding, then going back to do the other, to avoid missing areas as you went.  This was a problem I'd run into, so I followed the advice.
1. It works wonderfully.
2. It takes twice as long. TWICE!  On my fifth piece of seam binding I cheated and went back to sewing it onto both sides on at once. No surprise, I had to go back and fix a few missed spots on the backside.


I'm one of those people who is almost always cold, and two nights ago I was still pulling a regular sheet, a flannel sheet, and a comforter up around my face to keep snug during the night.

Suffice to say I'd been wary about using a quilt at all, let along when it's still in the 40's at night.  This quilt can't be more than half an inch thick, and once I put it on the bed it really looked like it was going to fail to keep me warm, I'm so used too used to having inches of fluffy stuff on the bed.

When bedtime came however, I slipped under the covers and found that the quilt quickly formed a cocoon of warmth that was really pleasant.  It still felt breathable, so I think as it gets warmer my husband will be able to tolerate it.  Super special bonus - the weight of all my blankets often presses down on my toes so I find myself having to sleep on my side or risk foot/ankle pain.  I'm pretty sure I didn't worry about stuff like that in my 20's... Anyway I didn't have a problem at all like that with this lightweight quilt, though I did still need flannel sheets.


Now mine is not as lovely as the original at Stitched in Color.  I also have not done any decorative stitching, in fact I think I'll put that off until I'm ready to wash it - it should be safe from falling apart until then.  Truthfully nothing is holding most of the middle together except some basting spray at the moment.  I chafe at the cruelty of trying to make it day by day in a society where I don't own a quilting sewing machine! Then again I had no idea I'd every quilt anything. 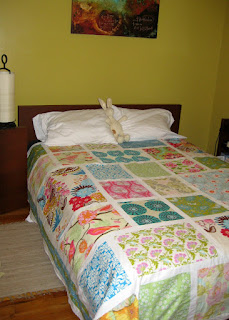 Really I actually have no idea why quilts are quilted together so thoroughly.  I did a bit of research on it but not enough to come up with enough answers.  Part of it is probably aesthetics, but since obviously sometimes it's a distraction if you have one color of thread going through multiple colors of fabric, there must be more reasons, and I plan on finding them out.

I've also found there's at least one place in the Seattle called City Quilting where you can take your finished quilt and they'll put it through their long arm machine.  If I had money to spare I might do that from time to time with certain quilts.

I only ended up needing to add about 8" to the side of my quilt so it'd be big enough to reach the floor on each side of our queen bed, so I used alternating strips of LouLouThi Coreopsis by Anna Maria Horner.

I used a king sized Warm & Natural batting from Joann's after reading positive reviews for it.  $24 during their 40% times (which it is right now).  It's online only so the shipping offsets that though. For my lap quilt I'd used Mountain Mist batting, and it was much harder to work with, the W&N is a nice flat even consistency.  I'll use it in the future too.


Phew, so back to working on the Patchwork Prism QAL!  Well, that and figuring out why I suck at taking good photos for the blog.  I switched to my husband's digital cam and that only seemed to help slightly.  Luckily there's lots of tutorials out there about this subject, though I don't normally have issues with taking clear photos so maybe it's just nerves ;)