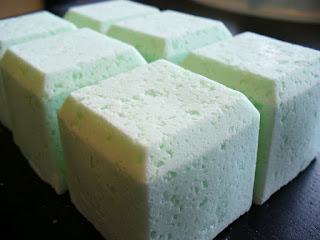 Since neither of the previous bath fizzie recipes I tried were particularly amazing, I decided to wing it, as I figured my own combo couldn't be worse than any other mix out there (not that it'd be better, just not worse...).  I was going to just go with baking soda and citric acid, but with yardwork and quilting I figured I could use some Epsom salts. 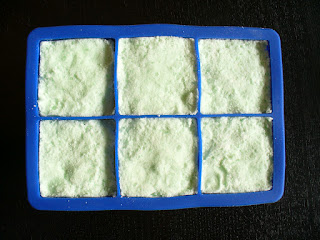 I made the mixture pretty damp this time before putting it in the silicone ice cube tray, damper than either recipe 1 or 2. I let it dry for 48 hours just to make sure it was dehydrated enough to not crumble apart when I removed it from the mold.

With a bit of forethought I could’ve gathered some mint and rosemary from my garden and dried it to throw in, but forethought isn’t really in my vocabulary. As it was, I got the whim to go make these and about 15 minutes later they were in the mold,  and I went back to my regular schedule of doing things not related to bath bombs.

Result: made 6 each 4 oz bath bombs.
*Skin softening - just the right amount of oil, but I think the almond oil is too viscous
*Did not float, the fizz was good but it was a slower, clearer effervescence than the other recipes
*Scent was good in the bomb itself, and when I put it in the water, the almond oil had trapped the essential oils and it EXPLODED in peppermint smell, which was nice, so I will always use a carrier oil along with essential oils.
*Leaving it to dry for 48 hours provide a very solid cube, harder than the other two recipes I mad with no crumbling at all
Score 3.8/5 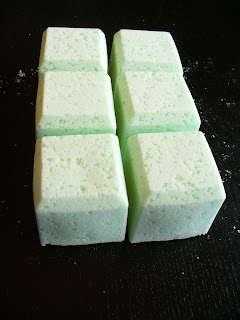 Verdict, although not bad overall, I think it could've benefited from some secondary skin softening agent other than oil.  I will keep making the mixes on the high side of moist in the future and just let them dry longer, it's much easier to work with I think and I like how "sturdy" they turned out.

Regarding floating - I’ve read that cornstarch is what makes bombs float, but neither of the other recipes floated - Lush’s float but don’t have cornstarch. I'm amazed how many threads are out there with people trying to figure out the floating bit!  Using witch hazel instead of water may do it, so I’ll pick some up.  Some say blending the dry ingredients in a processor first may also help.

Other ingredients I’ve seen people post about using are powdered milk or buttermilk.  I have some powdered buttermilk that has just been sitting all lonely in my cupboard, so perhaps I’ll break that out.  One person suggested adding clays to “improve the structural integrity of your bath fizzy and make it stronger.” And I do happen to have a couple of different powdered clays so we'll see how that turns out.

On the down side, the weather is warming up so I don't picture wanting to take a lot of long hot baths, and I know they lose their effectiveness with time.  If I keep this up, my poor husband is going to be stuck pawning these off to coworkers.  I'll make sure he only gives them to single men, cause it's funnier that way.
Posted by Ali at 7:56 PM