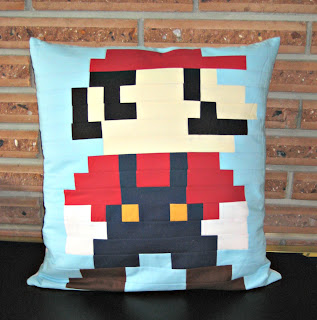 Angela at Cut to Pieces is in the process of doing a Mario Brothers quilt a long.  Now I played Pong on our Atari console as a kid, Kangaroo anyplace I could find it, and even Sonic the Hedgehog for like THREE hours as a  teenager to impress my boyfriend, but I certainly skipped right over the whole Mario thing.

I did manage to grow up to be somewhat of a video & board game lover (my husband works in the game industry so it's the least I can do?) but since I never played it, I don't usually really understand what all the excitement is about.

My friend Scot really loves Mario.  Like "hoping for a Mario themed wedding cake" loves. I made the mistake of telling him about the quilt along even though he had already been haranguing me (if you read this Scot, don't try denying it) yes haranguing me to make him something Mario related.  I had no desire to  because well...Mario just isn't "pretty".  Then this quilt along showed up and the amount of work that is going into those blocks, well, you have to be really committed.  I've been doing so much hand stitching and quilting that my body isn't up to something of that magnitude right now.


Scot is commuting 1100 miles today to go to a Seattle gaming convention (or visit me, I think its a toss up), and with my husband prefacing his visit by saying very unhelpful things like "Why don't you make Scot some Mario coasters ?" I decided I better make something before I was driven to violence.  Since Angela is awesomely posting PDF's of the blocks as they go in the flickr group for the QAL... 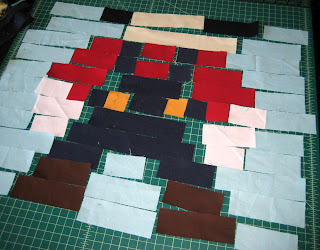 I decided to take the PDF of the Mario block, and break it down into longer strips instead of 1.5" squares  By just adding 1/4" seam allowance to the end of each color block, I was able to cut down the wear and tear on my body.   Luckily I finally got a 1/4" piecing foot which made this SO much easier (and straighter) when I put it together. I ended up with close to a 19" square, which could've been made a wee bit smaller to fit my 18" insert.  It's possible other people have done this for the QAL, I haven't had time to look through the whole group lately. 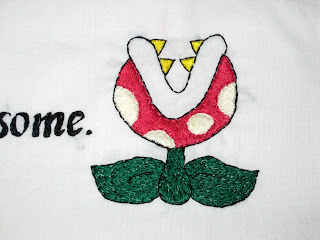 I thought I should use some embroidery too.  Scot likes to be told he's awesome (a Canadian thing?) so I put it in writing for him, I need to keep practicing that skill (embroidery, not flattering my friends).

He'd wanted to make himself a Piranha plant footstool after seeing a tutorial for it, so I figured he'd appreciate one on his pillow too, and I found an interesting take of it online .

Joann's Fabrics had all all the colors I needed in Kona cotton for this in stock (a miracle)!

I used fusible interfacing on the back of the embroidery to protect it, and since I had practiced zippers for my pouches earlier this year, I opted for a zipper closure.  It took a long full day to do the cutting and sewing, and a shorter day to do the embroidery.  I am not totally displeased with how it turned out (that counts as my version of a compliment to myself :).  I've put it in the "guest bedroom" (futon sofa residing in my husband's game room) on the bed for a surprise when he gets here in a few hours , and I now I feel I don't have to do anything else nice to prove I'm a good friend until his wedding next summer!
Posted by Ali at 5:36 PM