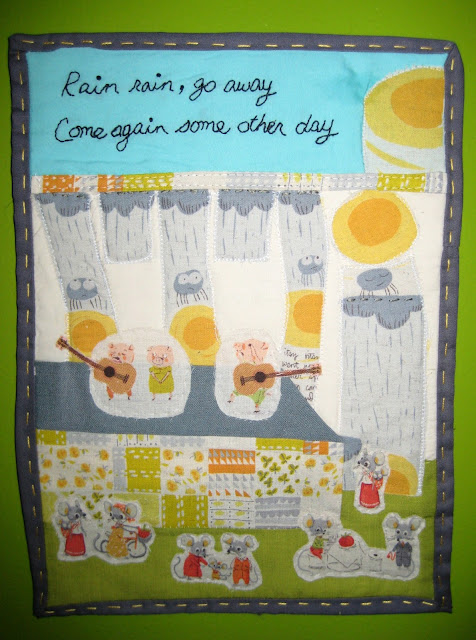 I'd been waiting for Heather Ross' Nursery Versery to be available at Intrepid thread, I really just wanted to make sure to get the Itsy Bitsy Spider print because it's so freakin adorable, but when Rachel at Stitched in Color decided to throw down the gauntlet and challenge us to do something with this line, I gave in and got a bundle from Fabricworm.com even though I had no ideas at all.

The only other Heather Ross fabric I've gotten my hands on is one of her guitar prints, which also arrived this Tuesday along with my Nursery Versery bundle. (Oh If only I'd gotten into sewing a year or two earlier!) and I decided to do something that incorporated it.  "It's Raining" is not my favorite Peter, Paul and Mary song by far, but it seemed apt for the print, especially as soon it's going to be rainy season here again. (Just to note, I'm torn between "500 Miles" and "Lemon Tree" ;) 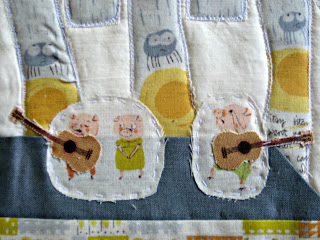 So that's what this is, Peter Paul and Mary on stage giving an outdoor concert.  I resisted the tempation to embroider long blonde hair on the female pig though...

I was going to make a mug rug originally, but the size kept increasing,and it turned into a er...somewhat rectangular wall hanging (9" by 12"). I used embroidery (poorly!) hand and machine applique & hand stitching on this.  I also learned I really need to practice binding corners on smaller projects!

I used Rowan Fabrics shot cotton for the grass (considered embroidering blades of grass onto it but nixed the idea) Essex linen for the stage, Art Gallery Pure Elements in Fresh Blue for the embroidery/sky.

I like aspects of it, but mostly I like that I did something outside of my comfort zone.  I dig tweaking other people's patterns and ideas, but I've never really improvised like this before and I'm not a creative type at all, so its nice to know that my brain is capable of making silly things.