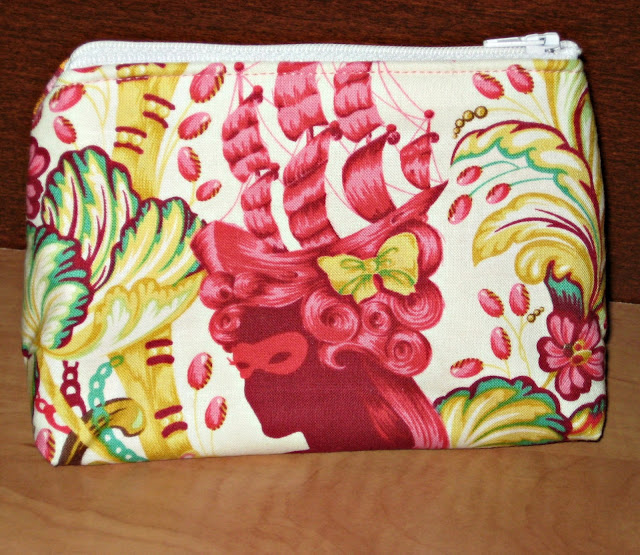 I managed to get a couple other projects finished this month, the first one was a makeup bag to match with the Amy Butler Weekender Bag I made out of Tula Pink fabric.

There was a pattern in Little Birds: 26 Handmade Projects to Sew, Stitch, Quilt & Love for a makeup bag with a template that was shaped differently than all the other little pouches I've made so far so I wanted to try it out. 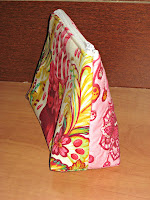 I made one side with Tula Pink's Bees Knees in Sunset and the other in her Cameo in Sprout, both of which I used in the weekender bag too.

I used FMQ around the flowers on the fabric/batting sandwich of the Bees Knees side (must practice!)  The little box corners I got from this were much easier to do than the traditional box corners of a lot the little bags I've made so far use, easier than sewing  square corners then having to sew again and cut chunks of it off to square it off.

This was a quick easy project (yay!)


The other thing I got done was to finally recover my ironing board.  The last cover I got was wrecked within a few months, so I've been looking for another one while stalling at the idea of making my own.  Nevertheless when I saw the link at how does she? for making your own cover, and took another glance at my stained ugly cover, I sucked it up and decided to go for it. 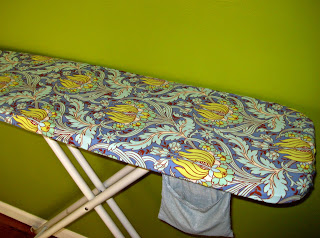 There was only one fabric in my stash I actually had enough of to make this, purchased before I actually started quilting and realized you don't go around buying yards of quilting fabric as if you're making clothes.  That was Amy Butler's Soul Blossoms Bliss Temple Tulips in Azure.

This tutorial was super easy to follow, and although I should've given myself a couple more inches to play with on each side, from cutting to finishing took me LESS than an hour.  I've just put it over my old cover so I could keep using the pocket that hangs from it, but next time I make one I'll sew a pocket into it most likely.


Is it almost February already?  I'll have to avoid the compulsive desire to make my husband heart shaped presents!