This is my first post for a 2013's A Lovely Year of Finishes. I started working on this project 4-5 months ago and it's been languishing while I did much funner things, and I am determined to finish it this month.  I'll be doing more traditional projects in the future, but I need to get this one out of the way.

I have a number of geeky video game lovers in my life (I guess I can include myself in that population), and it's fun to translate game stuff into crafting projects once in awhile.  If you haven't played portal (admittedly while it is cute and fun, I have not gotten around to playing through it myself)  the premise is simple, your character makes portals in different areas and walks in one and out the other to progress through the game.  Gosh, that sounds boring but it's not.  It's basically a rated G puzzle game with a slightly sarcastic robot narrating your progress. 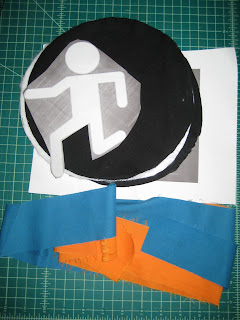 I made a few insinuated hot pads for Christmas, and when I saw the embroidery hoops from thetroublewithcrafting I realized it could translate (hopefully) into some potholders.


I was merrily zooming along when I got stuck.  I got stuck was because I had trouble printing out just the right size Chell (that's the character's name) to use to go on them.  Then when I thought I had it, with some experimentation realized there's not a graceful way to rotate him to keep him inside the potholder area without him being too present or not present enough in each one.  Also I have to do applique, and I am pretty intimidated at the idea of managing that with this project.

So everything is cut out, it had been hiding in a drawer like any good UFO should.  I guess now is as good a time as ever to let it sit on my table taunting me until I get it done!
Posted by Ali at 7:30 AM