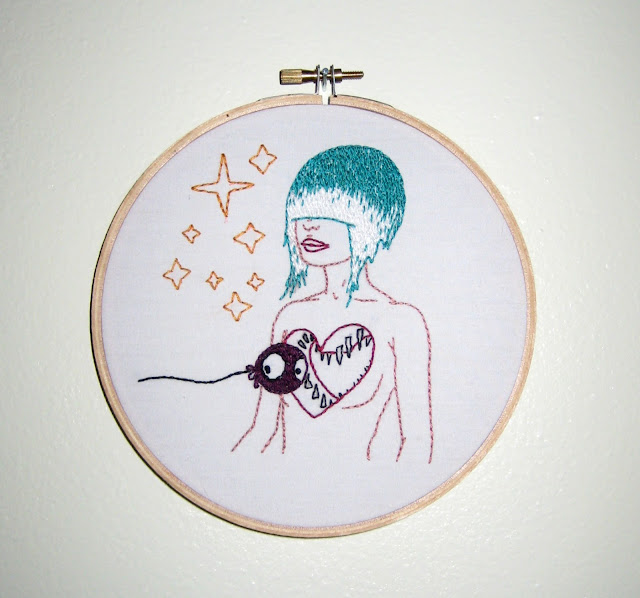 A couple of months ago I won a pack of Sublime Stitching's new line of embroidery floss in the color scheme "flowerbox"  from Feeling Stitchy.  I didn't go and actually open or USE it, I spent two months just gazing at the colors, cause they're so pretty. Winning something from a company is a great reason to buy something from them, so it was a perfect chance to get a gift for my sister (and some stuff for me, I admit it!).

I got two sets of floss in the "parlour" color scheme as it's my favorite, a pattern for each of us, and a pair of their wicked step scissors for my sister.  For my pattern I chose the ones by Tara McPherson, she's done art for a lot of bands I like enough to have made the effort to see in concert so that was an easy choice, while my sister gots the zombieish/monsterish/skaterish set by Michael Sieben.

I tried out the super cool looking "Wicked Step Scissors" to see if I should get some for myself too.  The way the blade is curved pushed both floss and pearl thread right out when I tried to cut it,, and if it managed to grab it at all it just gnawed it a bit.  Even holding the thread taut didn't result in a clean cut.  My husband tested them too in case it was a left vs right handed issue with the same results.  As scissors should make your life easier not harder, this obviously wasn't going to work.


I wrote about returning them & I got a fast response and great customer service from Stephanie and managed to get a pair of their less cool but still neat looking "black scissors " instead, which worked beautifully, so I'll be getting another pair for myself, none of my smaller pair of scissors has worked so nicely. 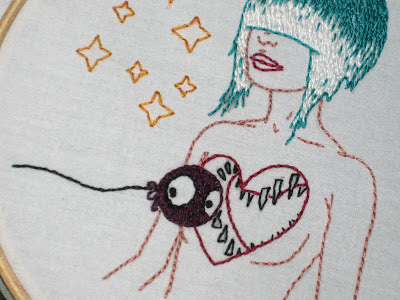 My favorite embroidery on the sheet was this one -  a lot of people have done it already so there was lots of inspiration.

I got some almost white DMC floss for part of the hair, but all the rest were colors from the parlor floss set. I love the floss, it didn't tangle at all, and the colors are very crisp and bright. (As in that balloon is more purple than I was able to capture in a photo.)  This was a fun piece to make, and I'm looking forward to trying out more of their patterns.
Posted by Ali at 1:58 PM

Email ThisBlogThis!Share to TwitterShare to FacebookShare to Pinterest
Labels: embroidery