Yay to the fact I have my January's Lovely year of Finishes project finished.  Boo to the fact it was harder than it probably had to be. 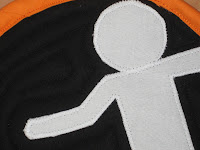 I did my applique Chells, THEN I found a wonderful picture tutorial with lots of tips and hints at Cat Patches on how to do applique.  I did use Steam a seam on the back of my figures, but that's about the only thing I did "right".

I didn't even think to use a blanket stitch for applique, I just zig zagged it.  Probably be more sturdy if it needs to be washed....And maybe I should've used fray check cause uh...it was fraying.

The orange binding went on beautifully.  The first blue I tried puckered and warped and went on horribly.  The only difference was the orange was unwashed & the blue, pre-washed.  In fact all three blues I have close enough to match the game's colors were pre-washed.

After pretending it didn't exist for a few days, I painstakingly ripping the binding off and tried again, startching the heck out of my new bias tape, and it worked out _much better_ but not anywhere as perfectly as unwashed fabric, so lesson learned (I hope!).  I think it was slightly narrower than the orange bias tape too.

On the down side, after taking the binding off I had to trim the edges of the potholder in a few spots and so the blue one is a bit smaller than the orange one. :|  The orange one sure looks great though! ;) 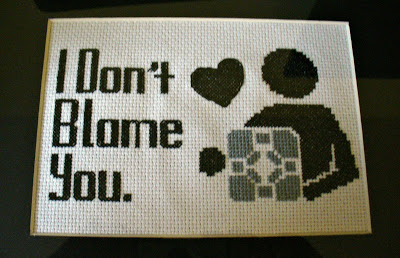 Apparently they wont be sullied in the kitchen so perhaps I could've skipped the insulated batting, but I'm glad they were well received, and now I can attempt something more challenging for next month's project!