My dual purpose sew along bag is finished, just under the deadline for the Tula Pink Sew Along, and ahead of schedule for the Long Weekend blog hop. 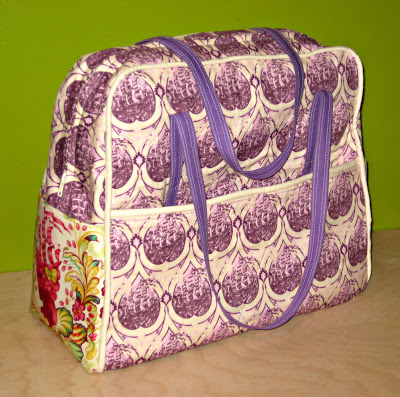 All the prints are Tula Pink, it has a few bits of solids for the patchwork. Kona in Bone for the piping
Kona in Crocus for the straps (which match the bag better in person than they seem to in photos)
A sturdy beige suiting fabric for the bottom.
I used Parisville's Sea of Tears in Dusk for the majority of the outside, a patchwork of Parisville & Birds and the Bees on one side.
For the lining, Bees Knees in Sunset which is too pretty to hide, but I did it anyway.  Lots of  Cameo in Sprout too as it's the first Tula Pink fabric I ever fell for, long before I ever had an idea that I would ditch garment sewing for quilts and crafty projects.

I'm going to just be upfront and gripe about the Weekender Bag pattern .  Its page on the website doesn't have a link to any corrections, so if I hadn't been doing this as part of a sew along I wouldn't have even known the were any.  What I like less is that if you find the corrections, you print out SIX pages of errata and then are supposed to use them to make changes to your pattern directions, crossing stuff out, re-labeling things, writing in the margins - which I find less than awesome.  I didn't because with my messy writing I wouldn't have been able to read a thing it said, so I had to go back and forth between the pattern and the printouts. With that many corrections I feel I should be able to print out an entire set of correct steps.

Amy Butler is awesome, and she generously offers free patterns too,  but I'm a bit reluctant to purchase any other patterns anytime soon, as besides the errata issue, I didn't find the directions super easy to follow (though more talented sewists have said they were fine - I am certainly not even classified as an intermediate quilter yet I imagine), partially because they weren't formatted in the most user friendly layout visually (for me at least), and partially because it felt like they jumped all over the place instead of moving through a natural flow for prep & assembly.  Nevertheless now that I've gone through the trouble to make this I'll probably make another as the end results are pleasing. 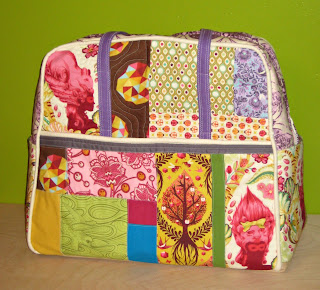 Ok, now that I've vented - I did patchwork for one side (not quilt as you go, just made quilt blocks to size). I used batting and some thicker myterious utility fabric to reinforce the sides and large pockets, and just used the Peltex for the bottom and the side pockets.

I made my handle length 48".  My Joann's didn't have either of the suggested zippers so I got a 30" dual separating parka zipper so I could open it from either side. I'd never inserted a zipper like the directions have you do  and it was really fun for some reason. I put an extra pocket inside one of the large outer pockets too. 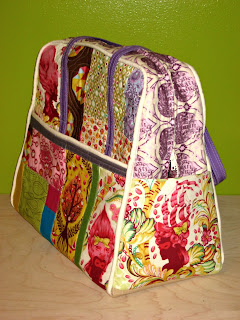 Making piping worried me because a piping foot isn't available for my machine, but it was easy to do with fusible tape.  I made it stop at ground level, as I didn't plan on putting feet on this bag & this way it won't be touching the ground and getting dirty.

Speaking of feet - with all the layers together, the only foot that could accommodate the height with the piping and get close enough to it was my blind hem foot, and I managed to break that pretty quickly.  That's actually two feet I've abused in the last month, maybe I better get some back ups just in case... Ont he bright side I didn't break a single needle!

I'd planned to add a zippered pocket inside but decided not to, figuring its an excuse to make more pouches to throw inside instead. 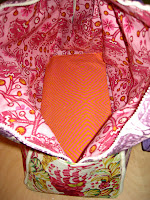 I mistakenly fused the interfacing to the lining fabric and not the outer fabric and didn't have extra, so it's not as firm as it would be otherwise, and there is some slack in the lining (I saw others say they had that issue too).  Truth is the lining directions was the one section where I have no clue what they are telling me to do without some visuals present to follow.

When I first tried to read through them I'd been working on the bag for 8 hours straight so feeling fuzzy, but I just reread them now and they still make my head hurt.  I get the idea that they tell me how to take up the slack fabric, but I will deal with that if I find it bothersome after using it.

And I too, like so many others, bled.  Bled and swore.  Swore and bled.  Actually got the sewing machine needle in my index finger a bit once. Grabbed the wrong end of more pins that I could count too.  My hands will heal in a couple days though, and even though I wasn't so sure about the bag in general or the fabric choices in particular I am happy with it.  I like that if I'm feeling subdued I can show the muted side to the world, and if I'm feeling a bit more outgoing I can put the noisy patchwork side out.  Now I'm just impatiently waiting for an excuse to use it!
Posted by Ali at 11:51 AM