Happy Valentine's day all! We are going out to our regular old Mexican restaurant where it is not going to be crowded or overwhelmingly romantic, then I'm getting into PJ's and we are going to watch  2010's "Valentine's Day" which I'd managed to avoid watching so far.

I've recently finished up a couple of sewing projects, and gotten into a new embroidery.
First I made a mug rug (5" by 7"), and I liked how it looked so I made a hot pad too.  Pretty simple, colorful scraps around a central rectangle. Batting for the mug rug, batting and insulated padding for the hot pad.

Very nice to find a way to use up some of my colorful little scraps.  Despite my fear of soiling the cleanliness of the hot pad, I had the nerve to rest a hot pan on it yesterday, and it emerged unscathed. 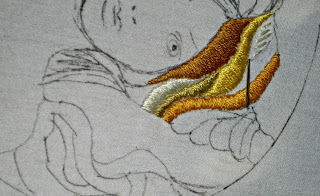 I'm also working on a new embroidery.  I've based the hair, at least, on a lovely drawing. hopefully I'm altering it enough that the artist wouldn't be offended.  I realized how rusty I am at drawing people's faces, and I'm not sure how it will turn out.

It's just nice to have some needlework to have for those times I want to be crafty but not get onto the sewng machine.

Of  the two less palatable subjects in his post, the first is me making a determination of  my blood type.  I never think to ask them to check it for me when donating blood.  Turns out you can find it out easily without a Dr's visit, and I got a kit from Amazon and tested myself. 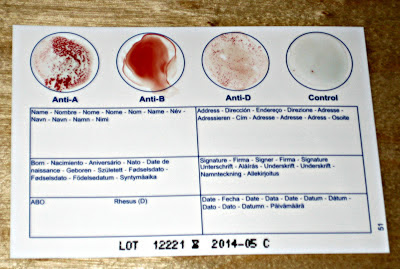 It didn't hurt, and the amazon reviews give lots of great tips (I watched a youtube video on the process as I did it too).  I did the control last because I was worried about not enough blood (hence the blue) and I didn't bleed enough.  Too bad this didn't arrive a day earlier when I'd poked myself in the finger with a basting safety pin - that of course, wouldn't stop bleeding for ages.

Blood type, A+, well that makes sense, I am awesome!


And for an actual NSFW project, here is a negative space embroidery I  am considering finished.  I know some people are offended by swearing so I decided to just link to it instead of posting a picture here.  I used to cook for a living & and that is what I yell when I'd burn myself.  I have managed to get back into the habit again when my iron decides to jettison steam onto my hand, so when I was deciding what to do for this sort of embroidery, it made sense.  I found the french knots kind of relaxing, but after awhile it can get tiring and when the flash hit it, it highlighted the fact here are still spots that could use a lot more!
Posted by Ali at 8:39 AM