I thought this week's Zakka Style project was going to be perfect for packaging gifts for the holidays.  I  decided to try one with some linen from Joann's that I picked up purely for the Zakka Style Sew along, and one out of some Essex Linen which I just got last week from Sew Mama Sew! (with a gift card I won from a previous week's Zakka style project!) and hadn't worked with before.  The difference is pretty obvious.  The Joann's frayed a lot more, and doesn't feel or look anywhere as nice as the Essex. 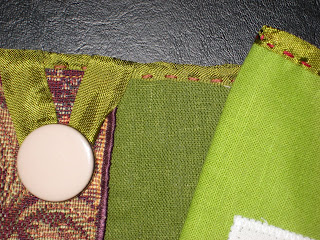 I used Hug Snug seam binding to bind the top, and embroidery floss to secure it with a running stitch (after basting it).  On the Joann's I also put another layer of Hug Snug around the inside with fusible web tape, which I think makes the inside look a bit prettier than it did.  I also used Hug Snug for just about everything else (the rolls do come with 100 yards after all!).  For the Joann's I did a loop for the button, but for the Essex I decided to make it so I could close it with a bow instead.


I planned on making a inspirational bit of cross stitch for the Essex pouch but well...I have so many other things I'm working on I didn't!  (And I'm like...what do I make...something that says THRIVE! ?  GROW! ?...really I couldn't figure out what was both gift givey and also works with Aneela Hoey's little red riding hood.

There's a good chance I'll take that red lacy bit off of it  though, I'm pretty sure it's purpose was to decorate lingerie :o  I'm finding I'm seriously short on buttons, ribbons, and other decorative bits, but that's OK since embellishing things isn't my forte.  My trimmings came from Fabric Mart,  the Joann's trim and red lacy bits from a random trim bundle and the Essex's Mokuba ribbon purchased on purpose.  (Does that explain any embarassment I have about my odd decorating?)

Overall I loved this project from the Zakka Style book. Direction wise, it was a bit confusing, as it said you had to have scraps of lining and linen that were at least 8 x 13", then further down asked for two 6.5 x 7.5" pieces... that meant I cut the 8 x 13 and then would've wasted the 1/2" excess.  Instead I cut it to 6.5 x 8" but I still didn't understand the purpose of different dimensions.

This is nice because you can cut it for any size from a softcover book or Ipad or magazine (with subscription already ordered, yes!), and I love how if you are _thoughtful_ with your decorating, you can make some lovely gift bags with this concept!
Posted by Ali at 7:26 AM