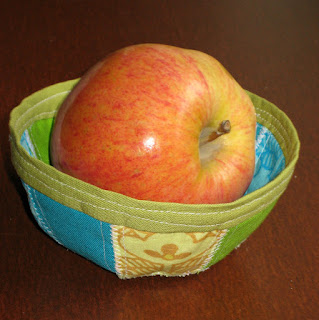 There's a tutorial for a set of fabric nesting bowls in Stash Happy Patchwork, by Cynthia Shaffer.  The book has 25 fun projects, including a cool quilted bento box holder my husband refused to let me make for him. :*(

The design and template in the book are for bowls with wavy tops, but I altered it so it would be smooth"ish" and round instead.

This is the largest bowl, it's about 4.25" in diameter.  I was tempted to make larger ones, but I think they'd have to be reinforced quite a bit, all that's holding the petals together is the zigzag stitching.


I'm considering this a practice bowl, hopefully the next one will have some of the kinks worked out.

My zigzag stitch was set at 3.5mm width and I think next time I'll move it up to 4mm, it was a bit tricky to get the sides evenly caught up in the stitches.

It might be fun to baste the petals and use a herringbone stitch to embroider them instead, it'd be attractive and maybe even sturdier.

I didn't use spray adhesive to adhere the two layers together as suggested, instead I quilted the bottom together & stitched around the sides of the petals before putting it together.  I don't like how the additional stitching looks visually, a basting stitch could be used instead and taken out after the bowl's assembled.

I forgot to take a picture of the bowl after the sides were sewn together but before I started working on attaching the binding. 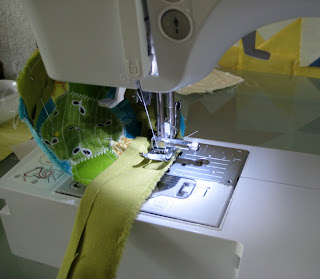 The binding was sewn on as I did for the potholders I just made for the Zakka Style sew along (well except for the clips, and the orderly neatness), the tutorial is found here at retro mama.  This method works extra well for rounded items I think, it folds over snuggly and curls the edges in a bit when you flip it over to the outside.

I ironed the binding's edge under 1/4" for a finished edge on the outside when it got flipped to the outside.  I didn't bother doing a good job with the binding, I'd already realized this was a tester bowl so didn't take as much care with it. 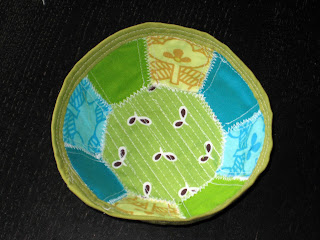 Fabrics: For the petals I used (I think) Pat Bravo's Pure Elements for solids & Frida's Dream in cool & bright (Art Gallery's Rhapsodia collection).   I used Flea Market Fancy's Eyelet in green for the bottom, and Kona in Olive for the binding.

It may have taken as much as 90 minutes to do this, I did it over a couple of days so I didn't really keep track.  Tip - ironing the fabric to freezer paper first made cutting out the petals a breeze!