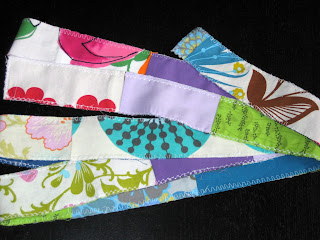 First off, I think Zakka Style's patchwork ribbon is a fun idea.  This example of it isn't so much (I don't have a ton of scraps yet) but I'll definitely be getting some Christmas fabric of some sort to make holiday ribbon, and probably save romanticky pinks reds and white scraps to make ribbon for Valentine's & birthday gifts for my husband.

There's not much else to say about this, I opted to use 2" strips, I had enough scraps to make 9 totally mismatching feet of it.

I've found that I need a dozen pincushions.  Or I should say there's not a single place in my house I haven't found myself needing one.  Since I've found myself walking around for hours with a few pins secured through a sleeve until I remember to put them where they belong, I figured it's safer to just make more pincushions!  I just embroidered a scrap of fabric with a design from Doodle Stitching - The Motif Collection and stuffed it with Poly-Fil.

Oh gaming conventions - my husband works for a game company and was gone most of last week to San Diego Comic-Con.  I've gone a couple of times but wasn't up for the crowds and entertaining myself while he worked this year.
The alone time was great for me because I had lots of sewing time!  I look forward to when he gets home but it's always a mixed bag because he comes armed with "gifts".  This time he got me a Deviled Hanimal and a drawing of a cat sitting in a litter box.  Among the things he got for himself are a Cthulhu snowglobe which will be heading directly to his man-room, and a print of all the Dr Who doctors as cats.   Oh men!