My mom canned quite a bit during a couple of summers when I was young.  We had a pear tree and there were rows and rows of white red and green tinted quart jars full of vanilla, mint and cinnamon pears along the shelves.  Sensible or not to be eating home canned goods so far down the road - as the the seals held we had the last jars almost 15 years after they were canned, and they were as good as ever. 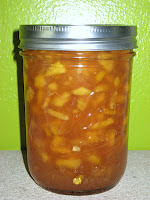 I've been meaning to try my hand at canning since I was a teenager (which is currently like a really really long time ago).  I keep hoping to grow enough produce of my own to can, but our yard is very shady and the weather's been bad the last couple of years - even with new raised beds not much wants to grow - not even zucchini!   Since I could be waiting forever for a "need" to can, I decided to get around to it the way I do most things - which is to get the "props" first.  A canning book for Christmas, then jars a few weeks ago. (side note, that list should've included jar lifting tongs, I don't recommend canning without them unless you like splashing yourself with boiling water!!)


Last week we were at Trader Joe's and my husband pointed to a 3 lb box of peaches and suggested I get them so I could actually, you know, make some jam.  It wasn't until the next day that I remembered I don't like peach jam - well I've never had it, so I assumed I don't like it.   I love canned peaches but I dislike fresh ones, I'm a devoted nectarine girl.

Since I found myself in possession of a box of peaches anyway, I went ahead and did it.  I made the Sure Jell recipe (mostly).  It called for 5.5 cups of sugar to 4 cups of fruit (!!!) but I added another 1.5 cups of chopped peaches.  1 tsp ginger, 1/2 tsp cloves, 1/2 tsp cinnamon, an extra tablespoon of lemon juice, and a bit of rum extract.


Apparently in lots of fruit jam, especially peach, the fruit floats up to the top, and it can take up to a week to set.  I'd been flipping it over now and again to help disperse it.  However I can quit that since my jam did NOT set up.  From reading around it looks like you should cook the fruit for awhile to let it's natural pectins release before adding additional pectin, but since the directions just said bring to a boil then add pectin, that's what I did.  Nevertheless I've ended up with 4 pint jars of a nice thick spiced peach sauce which will be great on ice cream and French toast. 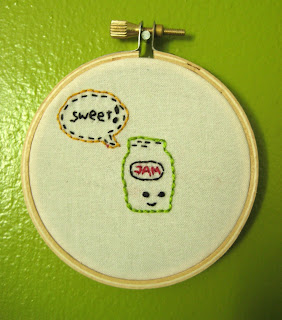 I'm almost caught up with the Handstitched Class quilt (well...to the last lessons stuff at least!) but I needed a break from intensive stitching so I thought I'd do a nice quick fun embroidery project so I could regroup.

Mollie from Wild Olive was nice enough to make a download of cute stuff available on the day of her blog's 8 year anniversary which I managed to grab (and her stuff is just so cute!!) so I cobbled together two of the images to make some commemorative jam art.   Maybe I should make a second one that says syrup. ;(