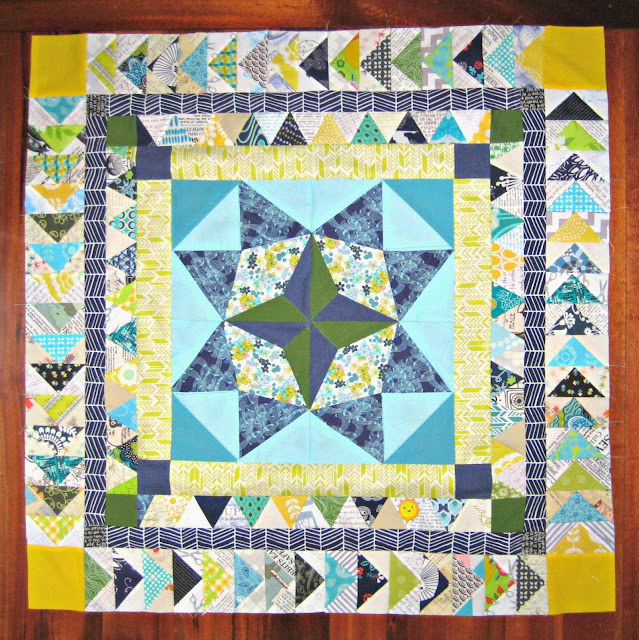 I had to spread the flying geese construction portion of this over a several day period to spare my sanity.  There's supposed to be 16 on each side but I had to cut it down to 15 so the borders weren't entirely too long.  I did some searches to see if anybody had said what their finished FG block size was, and although I saw some people ask the question, I didn't find an answer. 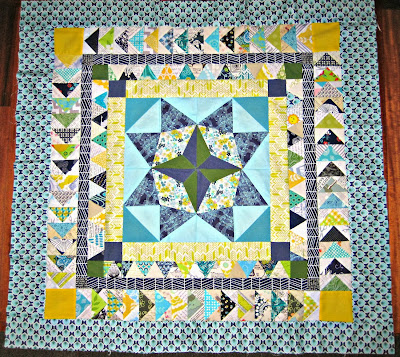 One thing I don't like about Liberty Love - it doesn't give finished sizes for each border/block as you go (or I missed it the dozen times I looked - not out of the realm of possibility), I don't know if my center square was too small, or it was some other border that led to the flying geese issue, or if I needed to trim all the blocks down to some beats the hell out of me size so 16 fit.  Nevertheless I am aiming for a queen+ size instead of a throw now so keeping track doesn't matter so much after this point, when I get to the crosses I will make it work.  Sigh, I can't say that without feeling like I'm quoting Tim Gunn.


With that in mind, I decided to add an extra solid border with Kate Spain's Plumage in indigo at this point, and started the change to a rectangular shaped finished product.  Things are starting to ripple without having the exact measurements each block is supposed to be, which I suppose is going to call for quilt blocking at some point, maybe today, I just don't have a good place to do it since I haven't picked up the foam insulation boards I meant to after our move.  I'm not sure how many people I keep an eye on in the blogging quilting world do this - I never really see people talk about it, so I assume they just don't suck at accurate cutting like I do so don't need to ;)

I've reached the maximum quilt size I can take a picture of without standing on chairs to get the entire thing in a picture, better get my butt around to putting up another quilt wall of some sort.