April has not been a good month for me block wise,  I guess it's only halfway through the month but phew!

First the block for the And Sew On... BOM at Quiet Play was titled either “Snip It Real Good”. or “Not for Paper"  I'm going with the second because don't want to associate this block with vasectomies, for realz!  I need to go back and fix up the seam for this, but I'm feeling very rushed so not in a hurry to do so.  Never mind that my fabric choices...phew.  See how small that picture is?  yeah, that is how much I don't want

April's block for the Lucky Stars BOM  is Black Hole Star. I like it OKish, I wanted to add some darker colors into the mix, but because of the layout, I didn't use any of the Moda Bella in Sand in it, it doesn't tie into the other blocks at all.  The measurements given for one of the outer pieces were a itsy bit too small and so that caused some issues too. I might see how it looks with Sand as sashing.

I've been making slow progress on my 1" hexagon lap quilt, I can tell its going to be...eccentric.  Hey it almost covers my knees now, that's something! ;) 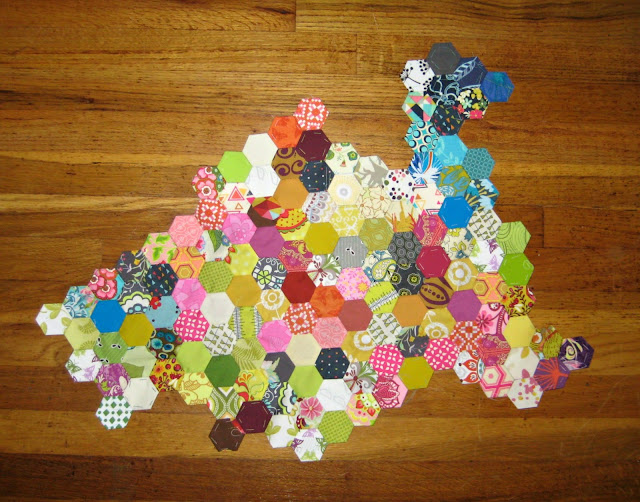 Email ThisBlogThis!Share to TwitterShare to FacebookShare to Pinterest
Labels: BoMs