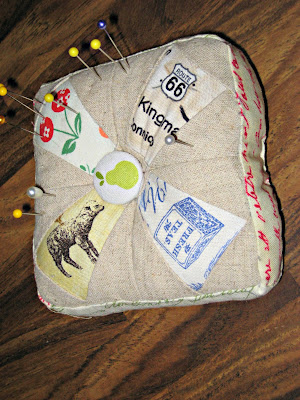 Now that I'm embroidering and sewing all over the place, I never seem to have enough pincushions around.  Like scissors and boxes of kleenex, I like to have at least one in each room. This was what I was looking forward most to making from the Patchwork Please going on for the Zakka Along 2.0 with Debbie at A Quilter's Table.

Not too much to say about this, it wasn't too hard to put together ( cause I did it messily), I've realized I'm not great at fussy cutting and I still haven't got the hang of doing neat corners in projects like this, especially seeing others pincushions.  It's larger than I thought it would be, and it's stuffed with poly-fil.  Pins go into the loosely stuff linen very nicely too, so win for me!

I'm sorry the sew along has come to a close, and I'll probably be going back to make a couple of projects I missed during the busy weeks of moving.  An awesome bonus is that I won the prizes in a drawing last week from Debbie - Aurifil and Pelleon swatches and some fabric!

Now back to my Marcelle Medallion, and trying to figure out how my newer sewing machine has been sitting in its box after being broken for 3 months and I haven't gotten it shipped out the door for warranty work yet.

Because there's not enough pictures here for my liking, I'll share these too.  I just got my order from Pink Castle which included a warm scrap bundle and because I'm a nosy bastard, a small scrap vomit bundle.  I'm happy with the variety of the scrap bundle, and I'll just stare at the scrap vomit for awhile until I can make sense of it ;)