This month got away from me, luckily its been busy with good things, not bad.  I finally hunkered down to do my BoM's though.

First was the Just Spoolin' Around block for the And Sew On... BOM at Quiet Play.

Didn't think a ton about what to use fabric wise, and didn't pull my other blocks out to make sure they'd all work together either, but that's just how I roll.

The background is busier than I planned but, live and learn (or don't learn, Im not gonna tell you what to do). 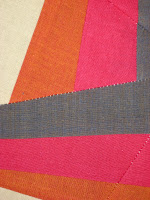 March's block for the Lucky Stars BOM  is called Ninja Star.  Wish there'd been a bit more fabric at the corners, since they'll be cut off when its sewn together, but at least it seems to be a pattern issue and not user error from what I can tell from flickr (for once ;)  This went together really easily for me all things considered.  There were less places to match and although I see it's a bit off kilter, I'm happy with it.

I do see that I need to PRESS and not iron if I don't want to see the stitches though, and I REALLY need to stop using white thread in the bobbins!


I'm likely to do some blocks from the Forest QAL co-hosted between Shape Moth and Sewing under RAINBOW, it looks kick ass.  I'm just not in a hurry since I wont be making a finished quilt (it's judged, ya know!) but the first two blocks are intricate and beautiful so hopefully I can make time for them.
Posted by Ali at 3:27 PM

Email ThisBlogThis!Share to TwitterShare to FacebookShare to Pinterest
Labels: BoMs