In August, Julie of The Intrepid Thread posted a picture of a pillow she made that I fell in love with and immediately pinned to pinterest.  I asked about the pattern and she said it was an adaptation of a winding ways block, and she used 2" strips for the print fabrics.  I've been up to my neck in quilts so normally I would let a project like this languish for months but I needed a quilt break one day so got busy with making this. 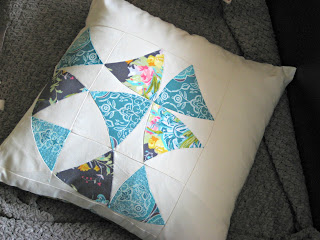 Julie is working on made a tutorial for her pillow now and I may re-attempt a second one using it.

I'm sure I'd have had better results in a few ways if I waited.  Hers is beautifully quilted, but I didn't use batting or interfacing to reinforce mine (which I would've if i'd taken a last look at hers before sewing things together).  That would've helped with the lumpy look (think I've had this particular pillow insert for a decade or so) and it could've benefited from an extra 1/2" fabric length and width wise. 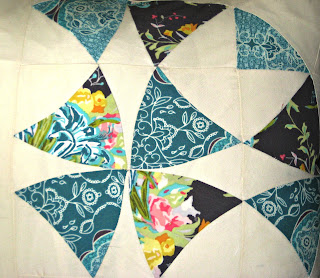 I've never done piecing like this before.  I was reluctant to pay $20 for templates if they were going to be used once then shoved into a drawer, so I searched around and took the cheapskate option of resizing and printing out the image of the winding ways block pieces at the Accuquilt website. Thank goodness for cardstock!

For the front I used the Lacis in blueberry and Lilly bouquet in dark prints from  LillyBelle & Kona cotton in Bone for the solid. There's a bit of rippling here and there and all my points dont line up but  I was happy to learn some new things. 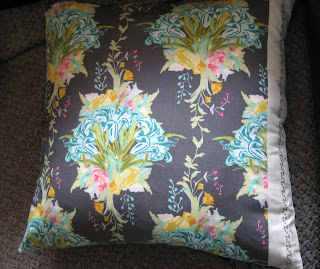 The back....sigh, I had enough width for the back, measured and cut incorrectly and ended up 2" short. I ended up just sewing a strip of Kona along it and embellishing it with one of the not that impressive decorative stitches my machine has.

That probably would've been a great opportunity to sew in a zipper but I didn't even think of that til right this very moment ;) This seems like a good time to get started on some other pillow covers now that I've gotten the ball rolling!
Posted by Ali at 10:07 AM