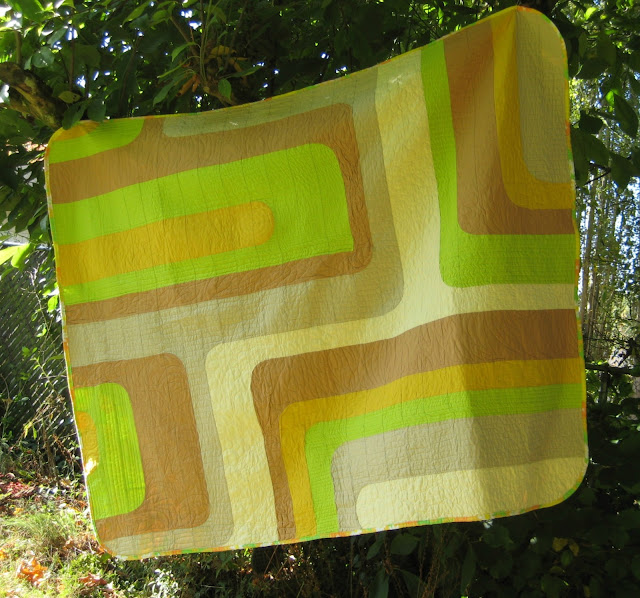 Phew, My totally groovy quilt is finally 100% done. This was a rewarding QAL in many ways - I learned curved piecing, followed my first actual quilt pattern, and tried 5 different styles of Free Motion Quilting.  (Though truth is I started with FMQ pebbles, then got increasingly simple with the designs as I realized what a big project it was.)  I enjoyed it enough that I am looking forward to trying some more of it though!  I want to thank Alyssa at Pile O' Fabric for making this happen. 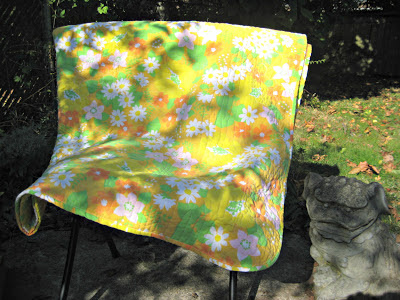 Part of the problem with this quilt pattern  frankly, in my opinion, is that Emily Ciel chose just about the best color combination for the quilt and Angela Walters quilted it so...you know what I'm saying?  For me it was going to be impossible to come close to the standards of the original without a great grasp on picking colors or quilting experience.

Nevertheless, my version has been really growing on me the last few weeks and I like it now!

I mentioned in earlier posts about the near day glow of a couple of the colors, but it seems to have toned down somewhat after being quilted.  For the back I found this sheet at Goodwill in equally bright colors, and decided it was perfect as is to use for the backing and trim. 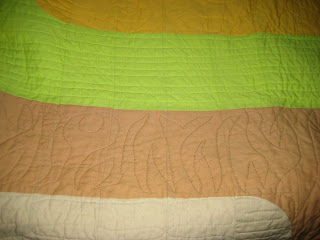 So...I was in the middle of quilting when I realized one section that was supposed to end in a curve, did not!  The strip of fabric was long enough to line up with everything else, so it didn't even register that something was wrong (part of the problem when you are sewing something together in a few sections, failing to see the big picture) Then again it wouldn't be a quilt I made if there wasn't some quirky mistake.

I also lost my directional orientation when quilting the green, despite my trying to pay attention I started quilting it in the opposite direction :|

I opted for rounded corners for a couple reasons.
#1 ease in binding (that's right, I said it, sheer laziness!)
#2 thought it would look kinda cool 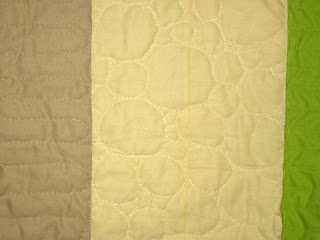 Biggest issue - I used spray basting AND safety pins, but because I was quilting one color at a time instead of from the center out, when I got to the last color there were a couple spots where a the quilt top shifted over during quilting leaving excess fabric in two parts of the darkest section (The Fig Tree Wheat).

For one of them I just gathered/ruffled it the best I could as I quilted it, in the other I took the section, tucked excess under, ironed it flat and quilted it.  Hope that doesn't happen to me again!