So I just participated in my first item swap, a pincushion swap at Threadbias.com. 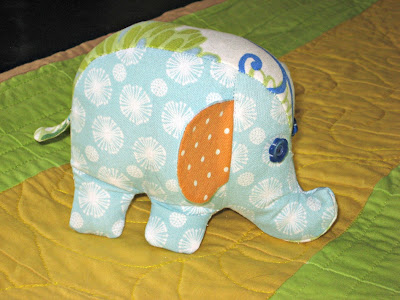 I'd seen the Effie & Ollie pincushion by Heather Bailey online, and when I wandered across it my local quilt store I had to get it.  I googled it and found out a couple things -
1. people like to make them and sell them on etsy
2. stuffing the legs full enough so it will actually stand up seemed to be a daunting task, let alone stand up tall enough so the trunk isn't touching the ground.

I was too intimidated to make it so it's hung there on my corkboard for several months taunting me.

When the pincushion swap came up, I saw that my swap partner, Debbie at SewZalot.com, had some adorable animals in her projects, so it seemed like a fortuitous time to buckle down and try it. I'll say a bit about the pattern - It was mostly straightforward, but had to re-do part of it when I struggled with one of the 90 degree angles when it didn't line up correctly (there are some challenging angles awhich I hadn't worked with before), and other reviews I read were right, it IS a bit difficult to sew the last pieces on with all the curves and small pieces, mainly to get it to go together perfectly at the front point between the eyes. 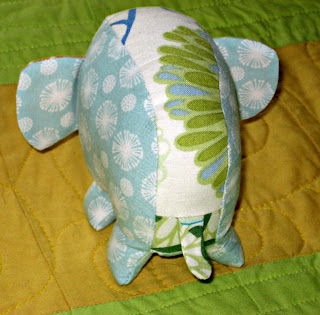 A couple recommendations I'll make about this pattern - the instructions have stitching or sewing buttons on for eyes as the last required step.  Despite my best efforts they didn't come out perfectly even, so I suggest doing this step before the pieces are sewn together.

Also, the opening on the elephant's stomach got stretched a bit when stuffing it, so I'd also recommend that minimally you baste back the seam allowances before stuffing, so it can be stitched closed more neatly than I was able to accomplish.

Now the pincushion I received, well my partner went all out.  More details of her project are here. She managed to combine the theme of orange/blue/green with the fact that it's just about Halloween.  I love her play on the orange to make it look like a pumpkin, how awesome is that?  Not only that but she paid attention to every detail and included all these wonderful touches and extras (the flower pins!!!  the little scissors with a hand stitched pouch!!! even a glittery spider!!!!).  I love how it's a pincushion on one side and a roomy carrying pouch on the other, and she filled it with color coordinated sewing goodies!

And now it's time for a disclaimer -I just need to put a big rant here at the end.  Projects swaps can be stressful!   I am now pretty sure my sewing skills aren't ready to share with the world. I almost scratched the elephant and tried something different (simple) but stubbornly went ahead, and then I just panicked for a couple weeks until it was time to mail it.  Phew!

I did cut out the fabric for an elephant for myself, and in retrospect it's obvious I should have made mine first to work out any kinks but I had my hands full with quilts, so I didn't, and it still hasn't gotten sewn together yet. If I do get brave enough to tackle a swap again, I'm taking a lesson from Debbie on how to make my swap item extra special.