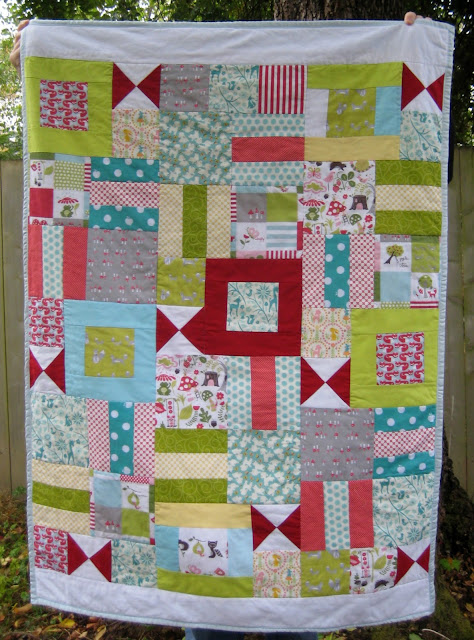 We have some friends due with their second baby this week (OK, we all know she's the one who has to give birth, but I want to be inclusive ;)
I am not too sure how this will go over for a few of reasons
1. Their house is minimalistic to say the least, not a lot of color present.
2. With the birth of their daughter they were not thrilled that people kept giving them pink stuff.  This one is a boy, and although the quilt isn't all blue, it sure has plenty of blue in it!
3.  They do that parenting thing where your kid sleeps in bed with you for the first couple of years instead of in a crib.  Not so sure what place a baby blanket has in the set up but now that I'm all gung ho into quilting, too bad, they get one anyway! 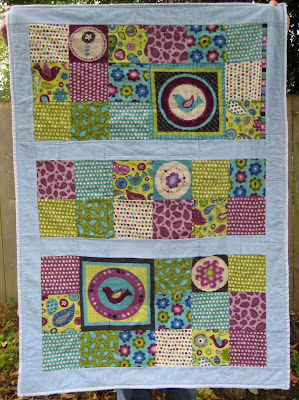 I made the back of the quilt first, a couple of months ago with Lesley Grainger's Pretty Paisley Flannel.

Originally I was considering it for the front but I like my soft cozy sides of things to be wrapped against me, so the back it was.  I was really pleased with sewing it, it didn't shed much at all when I pieced it together.

It's all nice and soft and I think I'll use the leftover scraps to make some rice hand warmers for the upcoming cold weather for myself and some Christmas gifts..

It was really nice of my husband to go out in the rain during half-time to hold the quilt up for me wasn't it?  I didn't get the perfect picture, but it was drizzling pretty hard on our heads as it was.

I'd been laboring hard (tee hee get it?) to decide what pattern to use for the front for months, and was running out of time. Late last month I saw the Bizzy Kid quilt pattern by Cluck Cluck Sew.

I had to fit the front to be back so I adapted the pattern somewhat, used  4 and 8 inch blocks instead & added some alternative rows.  I also simplified it somewhat since I was a bit too short on fabric for the larger white and solid cross quartered squares. My finished size was 37" by 52"  (Thanks for the wise advice on word usage Susan (originally I said I bastardized the pattern :o) 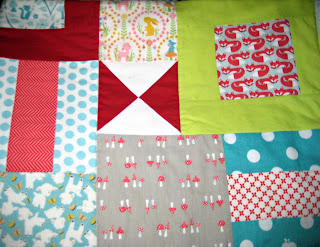 The other fabrics used in the quilt besides Kona solids-
Fox Hollow by MonaLuna
Good life by Deena Rutter
Woodland Trails by Riley Blake
Even a wee bit of Apple of My Eye by Riley Blake got thrown in.

My one regret is that I quilted with stitch in the ditch, since I'm not experienced enough to choose a quilting method that would not detract from at least something somewhere..  So it's somewhat visible on the flannel side.

Their daughter Anna is 3 now, so the Little Pocket Pillowcase I made for the Zakka Style sew along earlier this year is finally going to be hers, so she isn't left out.  Hopefully it's an appropriate gift for a three year old! 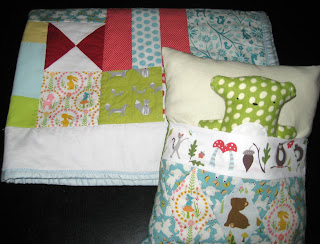