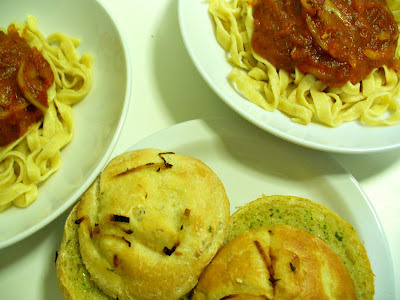 I realize blogging about making things should extend beyond crafting.  I may as well combine my fetish with taking blurry photos with my cooking and blogging habits.  Last year I'd gotten the bug to learn to make pasta for after reading about it at the kitchn.  My in-laws were awesome enough to give me the atlas pasta machine I'd had on my amazon wishlist for Christmas, so I got to work.  I've made it a half a dozen times so far, although I sure don't mix it by hand. It IS easy, and I don't really see how you could go wrong.  In 30 minutes you can have pasta for four ready to cook, and 20 minutes of that is letting the dough rest.

After a long ago culinary education (during which for some reason I never learned to make pasta), I realized why I cook and avoid baking - you don't need a recipe to cook, but if you're even a bit off ratios/process in baking, everything can go to hell in a hand-basket.  If you've read my posts about quilting you'll see being meticulous isn't my strong suit.  I thought pasta would be like baking, but it's not at all.  You can make it with nothing more than flour and water, and you don't have to be exact at all.


I thought I'd spare my husband from being forced to eat hot dogs for dinner, so during a sewing break I headed to the kitchen. This time I measured a cup of all purpose flour, threw about a quarter cup of semolina flour (makes it a bit more toothsome & filling which is nice when it's the main course), an egg, 1/4 teaspoon salt,  and a few tablespoons of water.  I generally have added a couple of teaspoons of olive oil, but I didn't this time.  Pasta is forgiving - while mixing if it's too dry you just add a bit more liquid, too wet you can just throw in more flour.  If you go to put it through a machine and it's sticky, you just dust it with flour as needed and it still turns out just right.


Five minutes in the mixer with the dough hook and it was resting (covered in plastic wrap, contrary to the above photo).  We had a mild winter so I went outside to harvest some herbs.  I got a food processor last month so whipped up some herb butter for rolls.  I mixed in some truffle oil. (Totally decadent huh? Well we got it from Italy several years ago, and there's no reason on earth it shouldn't have been used by now - even refrigerated it can't last forever you know? So I'm trying to throw it into random things.)

I Pulled a couple of homemade potato thyme rolls from the freezer - I don't love to bake but it doesn't stop me.  Started some pasta sauce by sauteing some herbs and sweet onion in some more truffle oil. Then I dumped in a jar of Prego. Yep.   Listen husband, I'd love to spend all day in the kitchen making you everything from scratch but let's be real, I have quilting to do.  At least I added a bay leaf and red pepper flakes! 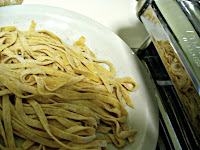 After 20 minutes I rolled the pasta out then cut it into linguine with the atlas machine. Fresh pasta only takes about 2 minutes to cook, which is something I love about it.  I cooked half for our dinner and covered and refrigerated the rest, making sure it was well floured so it wont stick together.  It's best eaten within two days, and it's smart to check it each day to make sure moisture isn't condensing and making it stick together.