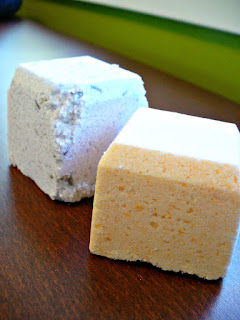 I have a love affair with Lush’s bath bombs.  I also don’t really have the budget to spend $5-6 per bath (and I love me some baths).  Sure, I usually get thrifty with the large ones and cut them in half, but I knew there were recipes to make your own. I’d been procrastinating for months, stuck on an internal debate about how much citric acid to get.  Luckily after splurging at lush.com for the holiday season (admittedly some of it was for Christmas presents), I knew I had to kick the habit.  There’s no need to waste money, and I make stuff. Says so right in my blog title… 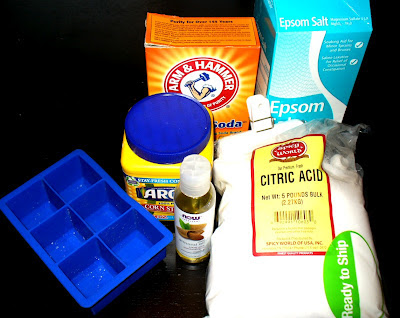 I picked up the things I could from the supermarket, and ordered the rest of the necessities from amazon.com, including a 2" silicone ice cube tray.  I decided I would make some existing recipes and then tinker with them until I found the perfect mix. I’ve tried two recipes to start.

Bath Bomb #1 www.instructables.com
This has a great step by step tutorial with pictures. I used my flour sifter to make sure there were no lumps in my ingredients.  I used a LOT of orange food color, almond oil for my oil, and a combination of essential oils (sweet orange, lemon, lemongrass & neroli) that added up to about 2 tsp. I'd read that if you used a silicone mold you should let them sit overnight to ensure enough moisture had evaporated to form a solid bomb before removing them, so I let them sit for 24 hours.

Result: made 6 each 3.5 oz bath bombs.
*Skin benefits? WAY too much oil, left my skin feeling like I’d just gotten an over-enthusiastic Swedish massage (which reminds me why I don’t usually use bath oils). I will either cut down the amount or using walnut oil in the future. My skin certainly was not dry afterwards.
*Did not float, fizzed very nicely 3 days after made, still fizzing at 1.5 weeks.
*Scent was wonderful and lingered during my entire bath (I’m thinking the almond oil held some of the essential oils in suspension)
*Nice solid cube
score 3.5/5 (mainly due to too much oil)


Bath Bomb #2 Martha Stewart
This was the first recipe I’d ever seen. I kind of wish I’d bought a 1” ice cube tray instead of the 2” one, so I could put them in cute jars.  This recipe did not specify how much water to use, so I tried to make it the approximate consistency of batch #1, but either I underestimated, or removed them from the mold too soon (about 18 hours later) because they were crumbly at the top corners. I used lavender, basil, and marjoram essential oils, estimating about 1.5 teaspoons.  I threw in some lavender flowers, and used purple food color.

Result: made 8 each 4.2 bath bombs (which meant I had to use a couple things other than the ice cube tray for the two extra.
*Skin benefits? With lush bombs you can tell in the water it’s making your skin silky, NONE of that with this recipe - however when I got out of the tub my skin wasn’t dried out by my super hot bath water, so that's something I suppose.
* Did not float - at day one, it was very fizzy, one week later it was noticeably less so.
*Scent was amazingly strong in the cube, but dissipated almost immediately in the water leaving me a sad panda.
* Crumbly cube, little pieces fell off everywhere as I moved it the two feet from it's container to the tub - probably due to the issues I mentioned above
Score 2/5

In summary:
I am much happier with bomb #1, though I do have another recipe or two I am going to try to see if they are a better base recipe. I’m estimating that it was less than $5 worth of ingredients for each recipe.  I want to note that the silicone ice cube tray still smells strongly of essential oils even after being run thru the dishwasher and airing for a week, so I don't think I'll be using it for ice cubes ever.
These were pretty fun to make, and I’ll likely make all my own in the future (especially if I can replicate Lush’s big blue bomb!) According to their labels, Lush bath bombs consist of just citric acid & sodium bicarbonate (baking soda), so I’ll be searching for simpler recipes too, as I’d like a working prototype in time for Mother’s day!
Posted by Ali at 12:19 PM