Zombies! (the drink, not the dead guys)

Dude... I wrote this post in 2012 and didn't publish it.  All I'm going to say is that when I moved into my own place, the only thing I stocked my bar with was the ingredients for this drink. Well..and I'll say "damn" I started this blog THAT long ago, and my goal was to have at least 3 fancy drinks under my belt to pull out at will, and all I still have is this??  SIGH. 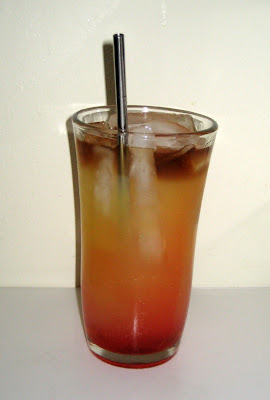 I aspire to have a few great mixed drink recipes memorized on the off chance I need to prove myself as a hip bartender someday, but so far I've just got this one.

Legend says it was created to help a a hung-over customer get through a business meeting.  he returned a few days later complaining he had been turned into a zombie for his entire trip.

This is my variation that doesn't require unusual ingredients on hand.  It's very strong - two's pushing it if you don't want to risk feeling like the aforementioned zombie afterwards!  It's not tropical drink weather, but when I make one I get to pretend I'm in Cancun and the sky isn't grey.

16 oz tumbler, filled to the rim with ice
1 oz light rum
1/2 oz spiced rum
1/2 oz triple sec
1/2 oz amaretto (besides french toast it's my only use for it!)
4 oz margarita mix
4 oz orange juice
1/2 oz grenadine (or a cherry syrup such as Torani from the coffee section of the grocery store)
then
1 oz dark rum floated on top

They can be put in any order, but I like the look of the dark rum floating on top, it makes me feel like a bartender! And yes that IS 3.5 ounces of alcohol, so it's a good drink to drink slowly while chatting with friends while the ice melts.  It's also just as nice with only 1/2 ounce of each rum.