I like the concept of Noodlehead's open wide zipper pouch so much that I thought I'd adapt it to fit a  specific item.  I'm still tinkering looking for the perfect bath bomb recipe, so I thought I'd try a new variant for a Christmas gift but I needed some packaging - and a custom bag seemed like a great solution. 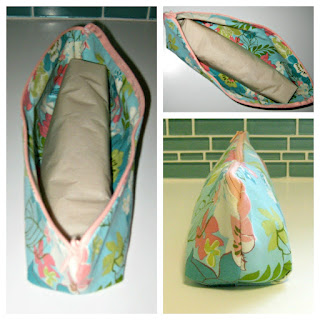 A recipe make 6 two inch squares in a silicone ice cube tray, but since I want to test at least one from every batch I make to give away, I needed to fit 5 of them in.  After measuring the dimensions of the row of bath bombs I cut two pieces of 10" by 16" fabric and one piece of batting the same size.

I followed the tutorial for the pouch to attach the zipper on one side, but since this was one piece of fabric instead of two I used a zipper several inches longer than the pouch and unzipped it most of the way so I could easily flip it in the other direction to sew the zipper onto the other side. 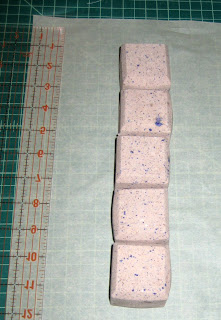 I hand stitched next to the zipper with cotton pearl thread to reinforce it, and made the box corners the right width for the bath bombs to be able to sit flat on the bottom of it. I just wrapped them in parchment paper (I had no idea tape wouldn't stick to parchment!) and they fit inside just about perfectly. The pouch is rather triangular viewed from the end.

This fabric is some that I picked up at Joann's before I started quilting or craft sewing - I have no idea why I bought this, it doesn't seem my style but I think it's a decent choice to house a bath item.  The shape of this is this.  The shape of the pouch is odd so I'm not sure what it will be used for afterwards.  I love how it opens all the way.

I whisked all the ingredients together except the last three.  Whisked in the essential oils. Dissolved some purple food coloring in 1/4 cup of witch hazel, then added it a bit at a time while whisking vigorously so it wouldn't react and fizz. Kept adding witch hazel until the mixture felt like lightly damp sand. Filled molds.

Result: made 6 bath bombs (forgot to weigh them).
*Skin softening - nice, not enough oil to leave any residue on the skin
*Did not float, had a decent fizz
*Scent was very present when it dissolved, but dissipated quickly afterwards, so I think mixing the essential oils with the other oils before mixing works better.
*I let them dry for 24 hours and with the clay it was dry by then, a very solid cube
Score 4/5

Verdict, no clue if the clay did anything other than help hold them together, so though it's already in the dry mix for my next batch, I'll switch to betonite in the future.  It really colored the bombs a clayish red (go figure huh?) which I didn't like. I couldn't tell if using witch hazel instead of water made any difference at all, so I just researched more to see what benefits it was meant to provide and found that "Bath bombs' outsides are often spritzed with witch hazel in order to help create a hard, crusty shell" Probably stick to water to mix in next time I suppose.

I am still not happy with the oil combination, the olive oil floated to the top of the water and it looked a bit odd due to its color.  Planning on using coconut oil next time.   The water didn't feel deliciously soft like it does with Lush bath bombs but my skin still feels softer than normal two days later. Not a bad recipe, still seeking something that makes the bath water feel great, and achieving floatiness!
Posted by Ali at 12:03 PM