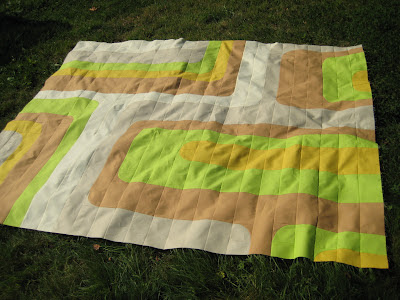 I finished my Totally Groovy quilt top over the weekend, and hope to sandwich it soon here - I'd lost track of the schedule for the QAL but it looks like I have about a month left to wrap it up.

I enjoyed sewing with the Moda Bella solids, though I feel they frayed more than Kona cotton, they didn't slide around at on each other while sewing, which was great for a quilt with this many strips. 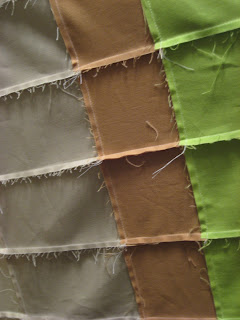 As I mentioned before... this is a wee bit day-glo, even for me. We've actually had a marathon rainless period here around Seattle (in fact I believe I've seen 30 seconds of rain in 60 days).   So I've been able to put it out in the sun to try to mellow out some of the harsher colors, 3 days and I can't tell a difference so...yay for the great color staying properties of  Moda Bella solids, but I guess I'm stuck with my brights for awhile ;)

I had a bit of problem with puckering, and not everything lined up though I pinned the heck out of it as I sewed, but I'm OK with how it turned out.

Now I have to start on the back, which will be pretty basic.  Somehow I ended up with a lot of leftover fabric strips though I was sure I followed directions on how much to cut - so  I may do something similar to what Alyssa at pileofabric is doing for hers here

On a side note - ouch.  I'm thinking hand stitching and quilting will have to only be a teeny part of my quilting in the future,  if my trapezius has anything to say about it in the future.  First week long muscle spasm of my life, much worse than a similar one I got last month after a marathon weekend of working on the Modern Medallion as well as the other quilt with hand quilting I'm working on.  I've hardly been able to sit at the computer to do things (which I've sure been missing!) but on the bright side it got me to get around to making a long overdue Chiropractic appointment!
Posted by Ali at 8:10 AM