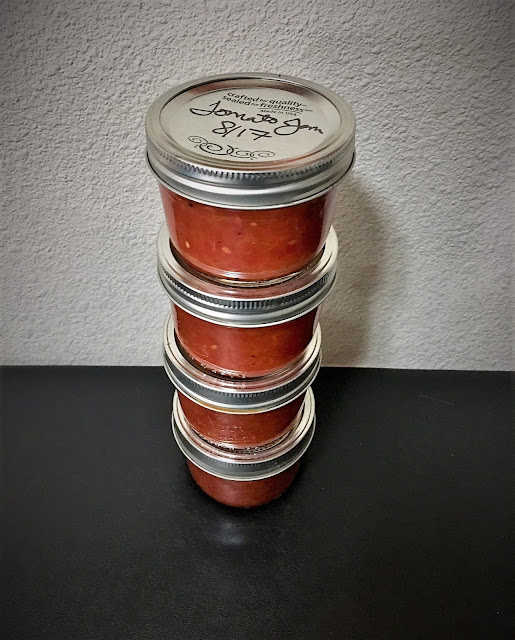 I canned once....  Five years ago I tried making peach jam.  It didn't gel and left me with 4 pints of  peach ice cream topping.... Last month I still had the jar I didn't give away and while I swear I packed it for my move earlier this month, now that I'm unpacked it's nowhere to be found.

After asking my boyfriend to make pickles in my presence for the third year in a row so I watch pressure canning occur, another year/season is quickly going by while he MAKES THEM WITHOUT ME.  *cough* I decided I should just dip my toes in with water bath canning.  My tomato plants are producing more tomatoes than I can eat, so I browsed around and decided to make Thomas Keller's tomato jam recipe  and water bath canned it.

I admit it, it wasn't too scary.  Next time I make tomato based things though, I'm going to use some of these tips so I don't have to cook all that water out.  I halved the sugar - reviews are right that it's too sweet, it was still too sweet when cooked down so I threw in a can of organic diced tomatoes and therefore more lime.  I also ignored the amounts for spices and did what I wanted - the cook in me rebels at following recipes, but I'm going to have to make sure I don't let that lead to altering the pH of any recipes.

So now I have 4 pert little jars of spicy tomato jam sitting on my counter. And since it made sense to make half pints instead of pints and only have pint jars on hand.. it meant I had to go buy half pint jars, and while I was at it 24 more pint jars, and 12 quart jars.. ahh overkill!

Now I was about to plunge into onion marmalade but after reading article after article about it, the safe route for that is pressure canning. This means I'm negotiating with my boyfriend to show me how to use his pressure cooker tomorrow night, because I do better on new things with a lesson from somebody who knows what they're doing.

While I wait I got antsy, so I'm about to delve into some fruit jam.  This is mainly a self motivational post - I've taken up several new hobbies in the last few years and have been busy, but I want a way to keep track of my experiments and it's a good reason to start blogging again.
Posted by Ali at 5:33 PM

Email ThisBlogThis!Share to TwitterShare to FacebookShare to Pinterest
Labels: canning