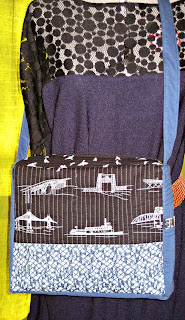 Now that I've made a couple of bags I thought I would try my hand at making a simple one myself (as both bags are too huge to carry as a purse).  I had an amazing purse that I bought for a trip to Italy some years back, it was ugly but GIANT, so I could carry all the normal things, a bottle of water, a book, a hex paper piecing kit, and still throw in whatever else I might need.  It got splattered with painty water a few weeks ago and I had to get rid of it.

My dress form was kind enough to model the tote for me so I could take some pictures (although she did bitch that I haven't finished the shirt she's wearing yet).  I think the storage inside is just about right, with one zipper pocket and two interior pockets for my keys and compact.  I put an exterior pocket on it for my phone and it was nice to be able to customize it to just the right size, deep enough so it doesn't peek out and get snatched by a crazed phone thief, but not so deep I'm digging for it if it rings.


Eventually I'll have the perfect bag, but for the moment, this is a great general tote. The only thing I don't love about this is that the fabric next to the zipper should be stiffer, but I made it right after the Aeroplane bag & before I vowed to the heavens above to never skimp on the proper interfacing again.

AND I should not be lazy, I should've switched my black thread out for something peachy to topstitch the interior zipper. Other than that, the only thing I would change is to insert some elastic or an elasticized pocket along one edge to slip my water bottle in so it can be upright instead of lying flat at the bottom.

Next on my table is a more purse shaped purse, we'll see how that goes, then I'll get back to other people's patterns, cause there are less headaches that way ;)
Posted by Ali at 10:06 AM

Email ThisBlogThis!Share to TwitterShare to FacebookShare to Pinterest
Labels: bags