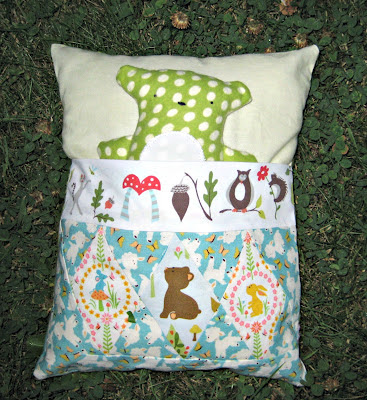 Having been under the weather all week, I had decided to pass on this Zakka Style Sew Along project until some time down the road.  Then Heidi at Fabric Mutt posted her version with a smaller pillow instead of a pillowcase, and I was all charmed by it.  I decided to I had to go ahead with something similar.

I'm often in danger of  not starting a project, or putting it down and never finishing it, if I don't get to it while its on my mind, and I was afraid that would happen to this. 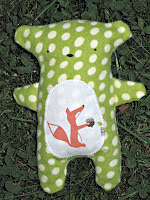 We have friends expecting a boy in October, who have a 3 year old girl.   I plan on making a baby blanket for him, but since I've only been crafting/quilting since earlier this year, hadn't made anything for her.  I'm pretty sure it's a crime to give a present to one kid without giving one to the other, so I'd always had this project in mind for her.

I made the diamonds larger (and no they didn't line up).  I used a bit of Woodland Tails by Riley Blake & Monaluna's Fox Hollow on the front & Lesley Grainger's Pretty Paisley Flannel for the back and bear.  I plan on using the same fabrics for the baby quilt.

The dimensions ended up being 10" by 12"  I'm thinking of this as more of a "Traveling Bear Sleeping Bag".  When I took it outside for its photo shoot and carried it back inside under my arm, I decided I might want to make myself one, it travels nicely that way!
Posted by Ali at 10:36 AM